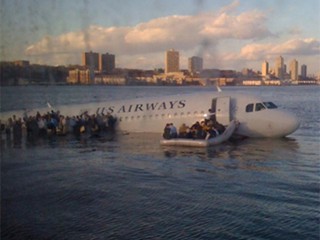 You may have heard about the US Airlines plane that crashed in to the Hudson a bit over an hour ago. Dan actually noticed the roar of the plane as it flew low over us (which is a bit scary).

While you don’t want things like that to happen, if it was going to happen it couldn’t have happened in a better place. Passengers are reporting that by the time they had the front doors open on the plane there were NY Waterway ferries waiting for them with their front ramps down. Apparently they were able to walk out of the plane into the ferry. To me that’s absolutely amazing.

But it wasn’t just ferries, the NYPD and FDNY are one of the best trained emergency responders anywhere, and they’re equipped for water emergencies with fire boats, police boats, divers, you name it. And there’s the Coast Guard which always trolls the waterways here. The only downside about it happening in New York was how cold it was today – about 20°F when the crash happened.

The ironic part is that the jet was flotsam, not jetsam. [Flotsam are things that float in the water, jetsam are things that sink.] And the morbid part of me wonders whether US Airways is going to start advertising free ferry service when you get to your destination…