The data from the 2010 Census has been released and I’m going to start doing posts of how different neighborhoods have changed over the past 10 years – starting with my own neighborhood – Census tract 222 which you could loosely call Mount Morris Park Northwest – going from 122nd Street to 126th Street and from Lenox Ave to Frederick Douglass Boulevard. 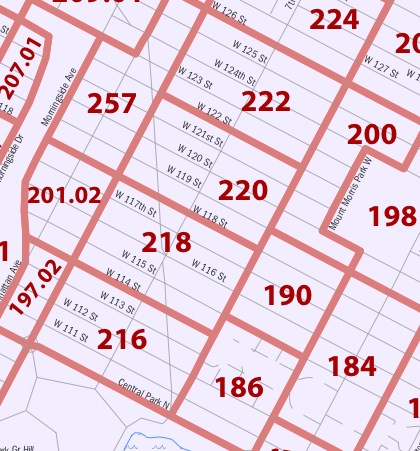 The quick take aways are as follows:

Before seeing the data I wondered whether non-blacks were displacing blacks or whether the percentage of blacks was going down due to new housing coming on the market and being occupied by non-blacks. Well, clearly blacks are getting displaced. I can’t say what the mechanism is for that displacement but one way or another it’s happening.

What this means is the black hegemony in Harlem is quickly becoming a thing of the past. If trends continue (and I see nothing stopping the trends), in 10 years it’s possible that there could be more white people in our immediate neighborhood than black people. That’s a bit shocking, actually…

Personally, I like racially diverse neighborhoods. Currently Dan and I live in a neighborhood (Hudson Heights) that’s 76% white and I find it a bit dull. But I have to wonder what this is going to do to the psyche of Black Harlem. For so many decades Harlem has been “theirs”. All indications are that they’ll lose their dominance in Harlem in the next 10 years – and they’ll lose it to whites more than any other group.