Progress was made on a few fronts this week. Before they can put on a proper roof they need to finish up the messy stuff up there – the parapet and the bulkhead. The parapet walls have been raised and around the area that will be a roof deck they’re making them look neat and uniform. Capstones will be put on top of what you see below.

I should also mention that we’re having to rebuild our neighbor’s chimneys. They were in horrible condition with (multiple) holes in the side. Rather than debating who should pay what since some of the holes were on our side of the wall (but their chimney) – it was easier to just fix it ourselves. 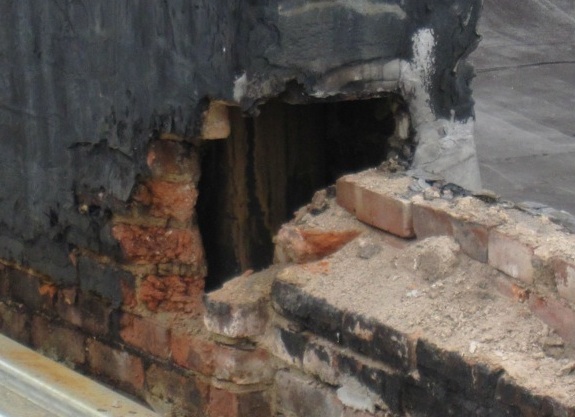 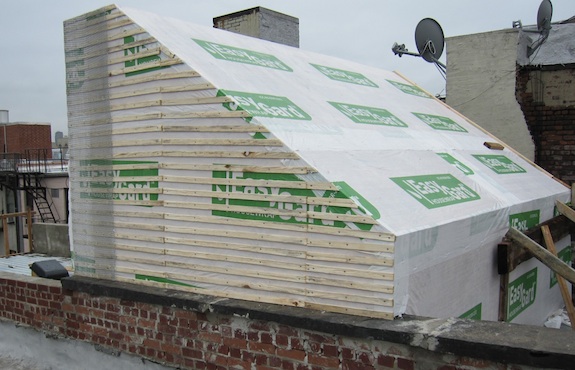 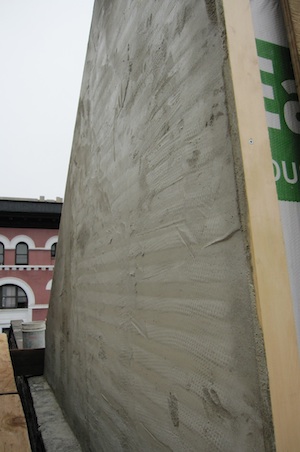 They’ve also started stuccoing the bulkhead. First step was putting up wood and wire lath. On the far side (along the alleyway) they’ve done the next step and put first coat of concrete (?). On top of that will go a finish coat.

Today we were discussing the color of the finish coat. Looks like we’ll tell the contractor to go with a sand color – light and neutral, though with all the soot in NYC air it’ll start looking dirty at some point and we’ll need to clean it.

The other thing that they worked on this week was wiring. They put in the casings for the electric meters, and started wiring the top few floors.

There was a little drama with the electrician. He needed plans so he grabbed the DOB approved plans off the wall. Thing is, they’re the originals that were signed by the plan examiner and they have to be available if an inspector shows up. Wouldn’t have been a huge problem except for the fact that he marked them up with all sorts of different colored markers. I’m not sure exactly how you replace original, signed plans… Needless to say there were some tense moments as I made it clear we weren’t happy that it had happened. 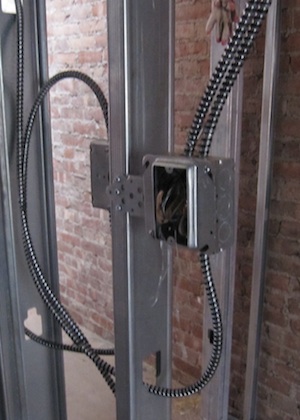 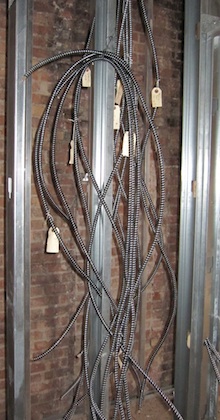 The other thing we worked on this week was the window order. We’re ordering from a manufacturer in Austria and being European they close the entire factory for two weeks in the summer. We were hoping to get the windows shipped before the holiday, but it turns out we were too late.  🙁  There’s just a lot of details to work out in the order and you gotta get it right – there aren’t really any do-overs with windows that are shipped from Europe. So it’s going to be a while before we get our windows…