Yesterday we had some architecture students over to the house and one of them noticed something… We’re not sure what to make of it and we don’t know how long they’ve been there, but there are a whole bunch of bullets in our back yard… 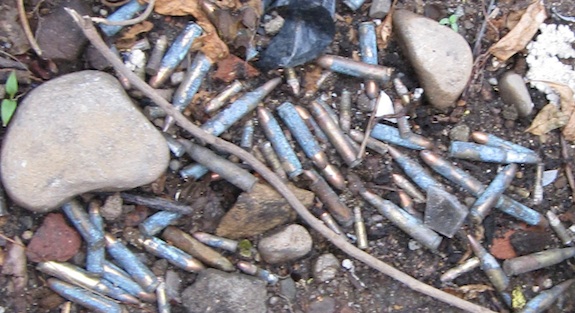 There used to be concrete covering the back yard. We’re not sure if they were under the concrete or whether they’ve been thrown there recently. Given the oxidation I’m guessing they’ve been there a while.

What’s the proper way to dispose of bullets? Should we take them to the police precinct?

So I gathered the bullets up and took them into the precinct. They were NOT happy to see me – they said I should have called 911. But seriously… flashing lights and sirens for a bunch of old bullets? They also thought I was bonkers for waiting two days to deal with them since I saw them on Saturday and didn’t do anything until Monday. But it’s not like they were going anywhere… I think they were most upset that they couldn’t get someone else to do the paperwork. They seemed to agree with me that the bullets were quite old – probably under the concrete for decades.

I stopped counting bullets at 30. I think there were probably 50 bullets there – at least three different calibers. There were these little baby bullets – I’d never seen anything that small before. The big ones seemed like they were on the small side of what you’d use in a rifle.

1 thought on “Bullets In The Back Yard”