The past few weeks have been pretty trying, which is why I haven’t done much blogging… Our job site got robbed at least twice in less than a week about 3 weeks ago now. The thieves ripped out installed copper pipes and caused about $4500 in damage (and that number is with the plumber being charitable and giving us a great price to fix the damage).

When it first happened we didn’t have electricity and hence didn’t have an alarm system. The only option to stop the robberies was a physical presence at the house. After the first robbery the contractor paid one of the guys on the block to look after the house, but then a day later we were robbed again. As they say, if you want it done right, do it yourself… So Dan and I started camping in the house. I jokingly called it “Occupy Harlem”. 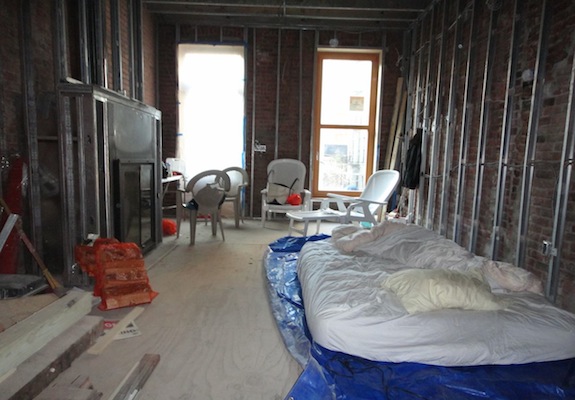 The place is filthy, so we put down a tarp to try to have a semi clean area to put the air mattress. The first few nights got down to about 34/35 degrees. I had brought a down comforter but that wasn’t enough. What I didn’t realize is that cold air would come up from below. After a few cold nights we started putting blankets under us as well as over us and that helped a lot. It’s also helped that most nights haven’t been that cold.

The first few nights were a bit spooky. Robberies had just happened and we didn’t know if they thieves would be back. After a night or two the contractor put up Home Depot motion sensors from and back so we knew if anyone jumped over the construction fence or got into the back yard. Problem is, a cat set off the alarm one time. Another time a “big ass raccoon” (to quote a neighbor) set off the front alarm, and I’ve also had rats set off the alarm as well as wind blow things and set it off. One time Dan saw some 20-something kids run off after it went off – not sure if they were trying to get in or just didn’t want to be around when alarms were going off.

What is nice is that we have a fire going in the fireplace when we’re there… It’s sorta peaceful. A few friends have stopped by, hung out and had beer & bourbon with us – that’s been fun…

All in all though staying at the house is exhausting – we just don’t sleep right when we’re there. Dan and I alternate most nights so one of us can get a proper night’s sleep at home in a real bed.

We’ll stop camping there when the security system is completely in. This past Friday the first part got installed, and after Wednesday it will be 95% complete. I’ll do another blog post on just the security system, but after Wednesday if someone tries to rob us we’ll catch them on camera and the police will get called. We’ll probably continue to spend the odd night there until security gates are on all the ground floor doors and windows. At that point we’ll be pretty impenetrable – gates on the rental and “smash proof” glass on our windows.