Despite it being a short week this week, quite a bit has been accomplished and the house once again feels radically different. Our contractor hired a subcontractor for drywall who brought in a big crew – roughly 8 guys. With those 8 on top of the 4 guys who work regularly for our contractor, plus an electrician or two on some days – the house is buzzing.

Pretty much all the drywall is now up in our unit and they’re working on drywall in the rental. There’s plenty of taping and mudding to do, but in just a few short days the house now has proper walls and the rooms are really taking shape. Here’s a few pictures…

Starting at the top – the architect suggested a curved corner in the bulkhead. Our architect’s day job is working for a “starchitect” who’s known for curves – so it just seemed right 😉 If you’re wondering, the big cut out is the sprinkler test station and the little box high on the wall will be the shock sensor in case a thief bangs on a window trying to break in. 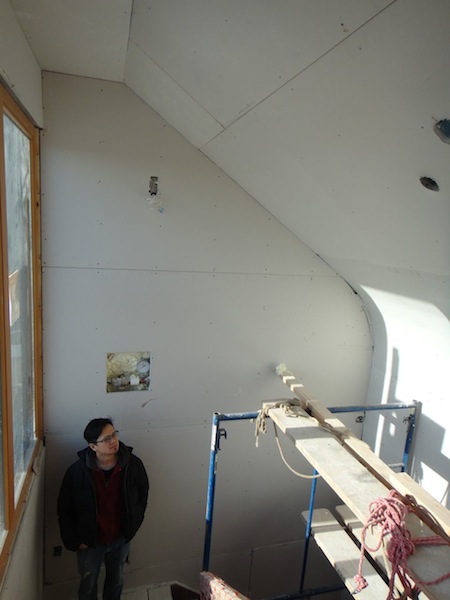 In the front of the top floor is Dan’s “gallery” (aka his clean art studio). This room is probably the most interesting in the house. It gets flooded with light from the bulkhead, but also gets northern light from the front windows. Plus the ceiling slopes up to over 12 feet in height at the front. The only downside is climbing to the 4th floor to get there. 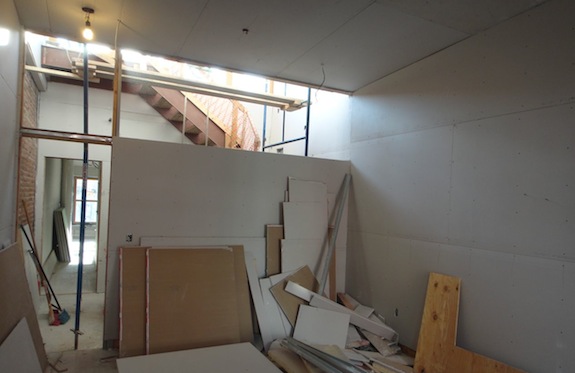 Going down the stairs – the stairwell between the 3rd and 4th floors is looking more complete… In the next week or so they’ll be painting the steel white and most walls are getting painted white as well. The (white) plexi panels will come at the end of the project. That means when it’s all done the stairwell will be all about white – the only color will be the white oak floors. 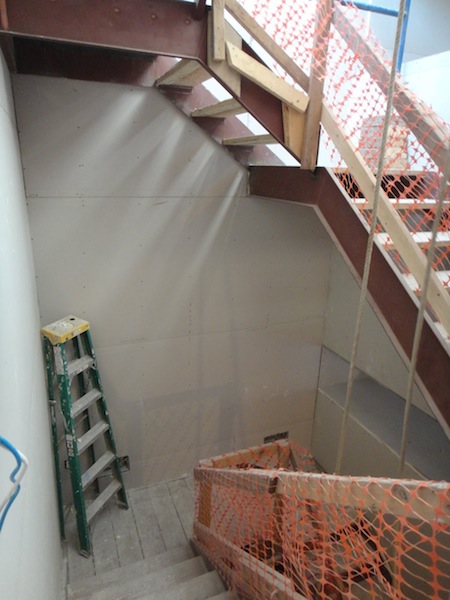 Below the gallery is the den on our master bedroom floor (picture below). This is where we’ll watch TV (we’re not going to put a TV in the living room). We’ve wired the room for surround sound – something I’ve wanted for a long time, but haven’t (yet) spent the money to have. What you’re looking at in the picture below will be a closet with a clerestory window above. Not a lot of light comes through there, but some does. You can see the other side of the clerestory window in the stairwell picture above. 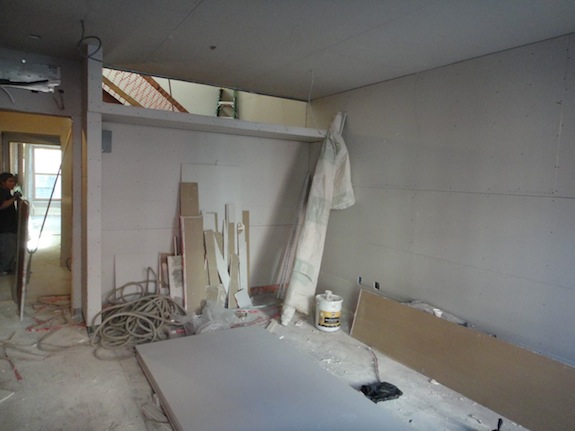 The back side of the 3rd floor is master bedroom. The alcove you see in the picture below is a closet. The room feels really big, but it is a pretty big room – since we went with smaller bathrooms and bigger bedrooms. 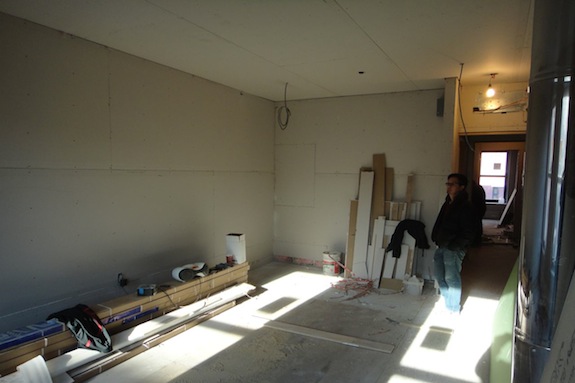 Skipping the 2nd floor (which is looking like the other floors), the parlor floor is coming along too… Below is what the living room looks like at this point. The lines on the ceiling are faux-recessed track lighting. We’re using these really thin track lights throughout the house and on the parlor floor we sorta recessed them so they’re a bit more minimal. The metal on either side of them are J-beads – so that will get covered with mud – it won’t stay metallic. 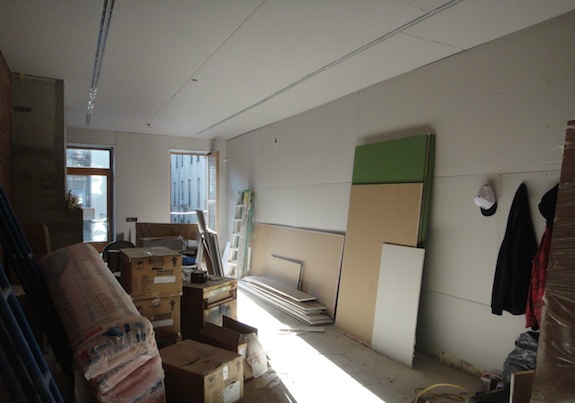 The same crew that’s sheetrocking will be painting – so that should hurry things along quite a bit since there are so many of them. At this rate they might be pretty much finished by the end of January.

2 thoughts on “Lots Of Progress On The Walls”