While the closed cell foam has been going in for a few days, yesterday when we went to the house the place just felt different – like it was the beginning of the end. Fiberglass sound insulation has been put in, and now when you walk through the house you don’t see the guts of the house so much. We’ve got yellowish white walls and either pink or yellow ceilings… 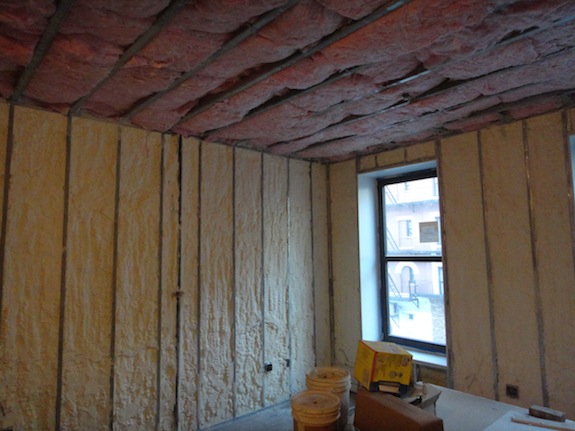 There’s still a little more to do (they missed a few walls – like the one in the picture below), but in general it looks great and it transforms the feeling of the house. Walking through the house is so different now – everything is just quieter and more muted and cozy. 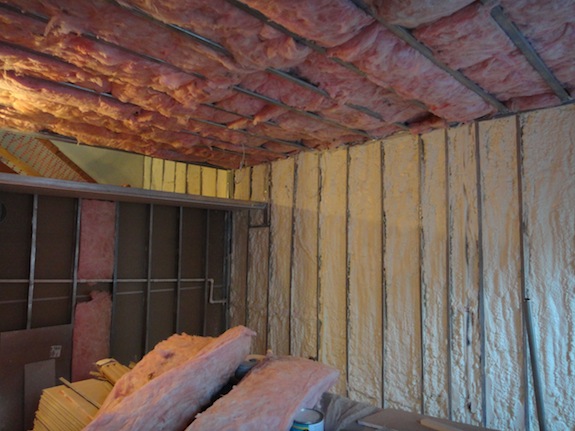 [If you’re wondering, the PVC you see in that wall is the condensation line for the A/C.]

One issue which I thought of just at the right moment was the sound insulation between the rental unit and our unit. When I thought about sound I realized our living room is right above their bedroom. I mentioned it to the contractor who mentioned it to the insulation sub-contractor and an $800 change order later we went with 5″ of open cell foam in the ceiling between the two units.

Open cell foam looks like closed cell foam, but it’s much softer – it feels like a fairly soft foam pillow. While closed cell foam is good at stopping thuddy sounds like someone walking overhead and the bass from a stereo, open cell foam is good over a broader range of sounds. Still, even with the open cell foam you can still hear people talking through the floor, but we still need to put the wood floor on and the ceiling below – that will improve things. I’m temped to put a second layer of drywall with a closed-cell-foamish sound proofing layer between the two layers for even more sound reduction – we’ll see.

So starting next week drywall should be going up pretty quickly. That will transform the house even more.

2 thoughts on “It Feels Like The Beginning Of The End”