There’s still a lot of work to be done on all the details, but we’ve pretty much got the layout of our townhouse determined. (Click on any image to see it bigger). 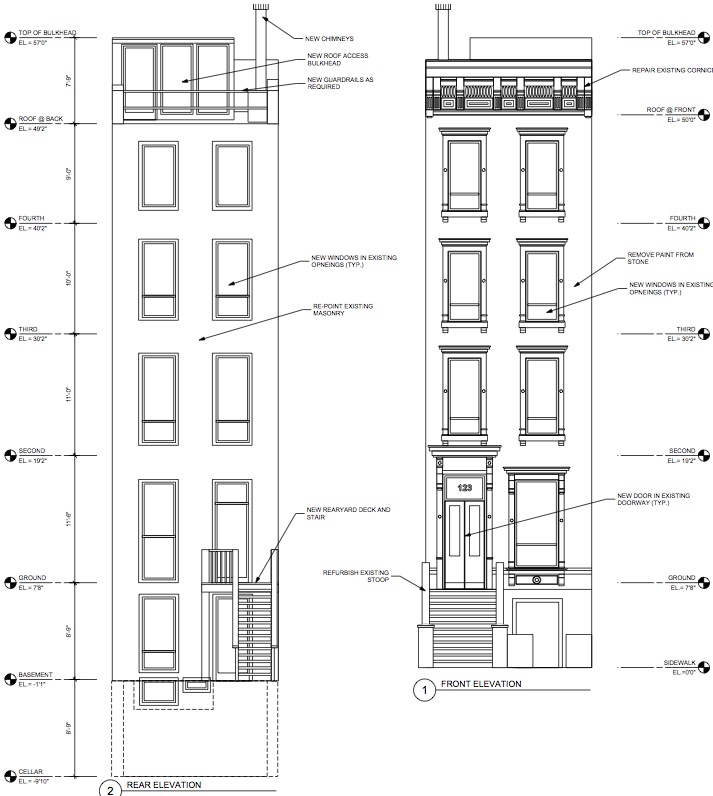 Our place is a 5 story townhouse that’s a narrow(ish) 15′ in width. It’s attached to sibling townhouse to the east (to the left as you look at the front of the building), but there’s an alleyway to the west between it and the apartment building next to it. The windows look off center because one sidewall is shared (and hence our portion of that wall is narrower which throws off the symmetry).

We’re still working on the window situation. What’s drawn is a casement window over a fixed pane transom. We need to do some measurements this weekend, but it may turn out that only double hung windows fit the current window openings since they’re wider than 3 feet. If we’re going to do casements in the front we have to make sure they’re in before the block is landmarked – apparently there are people who want to do it and there’s even a meeting about it tonight. Landmarking will help the value, but restrict what we can do in terms of development including what windows we can put on the front façade. Just for reference, the window next to the front door is huge – 4 1/2′ wide by 7 1/2′ tall! The window next to the door in the back (parlor floor) is 3 1/2′ wide by 8′ tall. We’ll may have to narrow the back windows to 3′ since that’s the maximum width for casement windows before you get into expensive custom “architectural” windows. We could also do double hung windows back there, but I’d really rather have casements.

The back side is south facing, so tons of light. The front faces north. 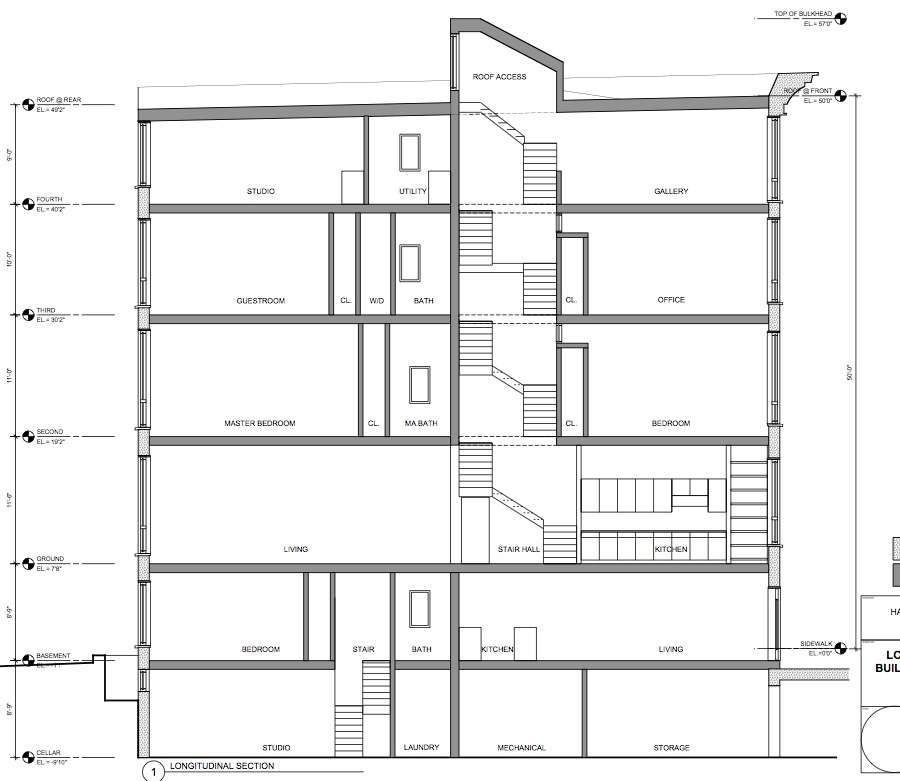 One thing that we loved as we were looking at townhouses was the quality of the light as you went up in the building and got light from the skylight. We’re not actually doing a skylight, instead we’re doing a bulkhead with south facing windows – just as you see in a lot of European factories. This should improve the quality of the light since it will reduce the light at noon in the summer when the sun is high in the sky, and increase the light in the winter when the sun is lower on the horizon. We’re devoting an bigger area than normal to the stairs and wrapping them around a “light well” which will bring the wonderful light down deeper into the building.

As you can see in the section view the house is basically a 6 bedroom owner’s unit over a 1 bedroom rental unit that has “accessory space” in the cellar. It may seem odd to have a 6 bedroom place in Manhattan, but if you think about a family with three kids – that’s three bedrooms for the kids + a master bedroom for the parents + a home office + a playroom/lounge for the kids. Even at 2 kids it makes sense – then they’d have a spare bedroom for guests.

Most townhouses are 4 floor buildings. We’re lucky to have a 5th floor. Dan’s a sculptor who’s never had enough space to do his work. One of our objectives in getting a townhouse was to give him space to do his art in a place where he could make as much noise as he wanted to (apartment buildings have lots of rules about noise). Initially he thought he’d take the cellar for art, but when this building had a 5th floor we decided to give it all to him for his art. In the back he’ll have a “dirty studio” which can get as messy as he wants. In the front will be his “clean studio”, and gallery space (if he can get people to walk up all those flights to look at the art). The dirty studio faces south so it will have tons of light and the gallery will get flooded with light from the bulkhead windows. However, FDNY may make us put a wall up between the stairs and the studio since it’s a bit of a fire hazard to have an open room at the top of a stairwell since fire spreads vertically. If that happens we’ll put a big window in the wall. In the middle will be a “utility room” that can easily be converted to another bathroom. It will have a slop sink, a small kitchenette, and some storage. The ceiling height on this floor will go gradually up and taper with the slope of the roof. In the back it will probably be about 8′, and in the front more like 9′.

One floor down will be my office. The fact that I’ve been self-employed for 9 years now (and for 3 years in the early 90s) is another reason why we needed more space. I need a proper office and that’s what will be in the front of the 3rd floor. Any street noise there might be won’t bother the office, unlike the guest bedroom which we’ve put in the back of the building. In the middle is a bathroom with an attached laundry room with a stacked washer/dryer. There will be exposed brick along the wall with the hallway. The other three walls will be insulated and sheetrocked since they’re exposed exterior walls. The ceilings are a nice 9′ high on this floor.

The next floor down is the floor just over the parlor and is traditionally called the “master/mistress floor” because the husband would have a bedroom in the front, and the wife a bedroom in rear and in the middle would be connecting dressing rooms. That let each spouse have a separate bedroom, but let them discretely go between the rooms as they desired.

We’ll have our master bedroom in the rear and a 2nd guest bedroom / den in the front. Since there wasn’t room for a second bathroom on the floor we’re putting in a pocket door so we can share our master bathroom if we have a lot of guests. The bathroom is smaller than some might want, but it’s plenty big for us. We opted to have a bigger master bedroom and a smaller master bath. I should mention that each of the bedrooms has about 10′ of closets – which we’ll really enjoy. There is a wood burning fireplace shown on the plans. It doesn’t use the existing chimney (which is on the opposite wall). It was just easier to put in a new fireplace and a new chimney. However, chances are the fireplaces will get cut due to a tight budget. But they’re something that can be done almost as easily at a later date.  The ceilings are a whopping 10′ on this floor.

One of the objectives in buying a townhouse was to have a back yard, so there are stairs going down so we have use of the back yard. We could have put in another rental unit on the parlor floor pretty easily and made it into a 3 family, but then the only outside space we would have had would have been the roof deck. The back yard isn’t huge – just 15′ x 26′ (390 sq. ft.) but it’ll still be really nice to have it.

It was tricky fitting a bathroom on this floor. The thing is you don’t want people using a bathroom next to where you’re making food, and you don’t want to think about someone else using the bathroom when you’re in the living room, and you definitely don’t want it to be an issue when you’re eating. The best solution was to tuck it under the stairs and put a privacy screen between it and what will be the dining area. We’ll just have the rule that if you need to use the bathroom during dinner you need to go and use one of the bathrooms on the upper floors.

The rental unit will help carry the cost of the (rather large) mortgage we have to get on the place. So it’s important that we have a nice rental apartment so it will rent quickly and for a good price. We’re including 1/2 of the cellar in the rental as a “accessory space” (see floor plan below). You’re not legally allowed to have a bedroom that’s fully below grade, but renters can use it as a media room, artist studio or home office. There will be about 725 sq. ft. on the main ground floor and another 225 or so in the cellar – so it will be over 1,050 sq. ft. The tenant will have access to the back yard, but we want the back yard to primarily be ours. So how much they’re allowed to use it will depend on how we get along with the tenant and how much we find ourselves using it. Ceiling height will be at least 8′. We’re thinking about raising the floor above and taking 6″ from the parlor level and lowering the floor in the rental 6″ in the living/kitchen area. Those two things would give 9′ ceilings in much of the rental and over 8′ ceilings elsewhere.

The one odd part about the building is that there are two entrances under the stoop. There’s a 3′ wide staircase down into the cellar, and a 2′ entrance to the ground floor. The 2′ entrance is not up to code and we doubt we can get it grandfathered, so we’re thinking we’ll need to make what was once the window into the legal door. The tenant can use either, but we’ll put french doors on the legal door so it can read visually as either a door or a window.

We have a “C2-4” commercial overlay on the property which means we can use the ground floor (and even the parlor floor) for commercial purposes. In regular economic times a commercial tenant would be better since they’d probably pay as much or more in rent and only be there during the day. We’ve done the layout so if you take out the kitchen it’s a viable office space or small store, hair salon, etc. However, we won’t be trying to get a commercial use specified in the C of O. We’re amending plans for 2 family building the prior owner got approved. If we went the commercial route it would cost us a lot more money. Down the road we can think about changing that – but not now.

Here you see how the tenant gets half of the cellar. There’s a mechanical room in the center and storage for us in the front. The townhouse is unique in having a “vault” under the “front yard”. Usually the utilities are brought in under the stoop, but since there are stairs under the stoop they created a little stone walled room with a rustic arched brick ceiling (that’s having problems). It’ll make a wonderful little wine cellar or dungeon – depending on your proclivities 🙂

So there you have it – top to bottom… Hopefully in a year we’ll be living in it!