Choosing the right windows for our townhouse is a lot more complicated than you’d think. The best website for guidance is EfficientWindows.org which has a page dedicated to what the effect of different choices will be on your heating and cooling bills. Here’s a screenshot showing what the top choices are (click on the image to see more). 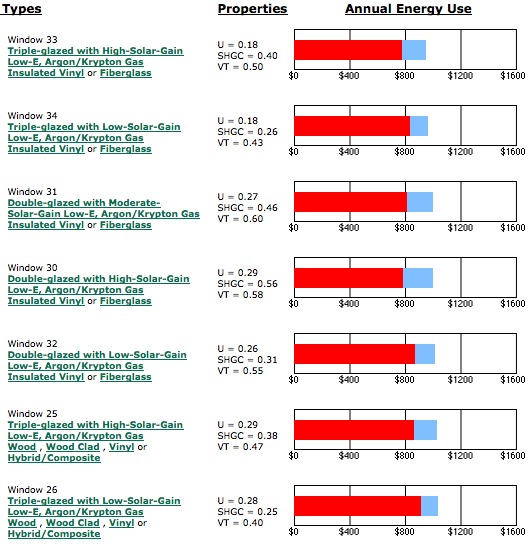 First, a few explanations of what some of those values mean…

The problem is that they assume that you’re installing the same types of windows in all the windows in your house and that you heat and cool your house evenly. Neither of those assumptions are true for us.

In our case the windows in the back are facing south and will get an incredible amount of light. The windows in the front will only get direct sun for maybe an hour early each morning, and the windows on the side will get no sun at all. Simply put you want different windows where there’s lots of direct light than you do where there’s virtually no direct light, so those recommendations only take you so far…

The other issue is balancing the windows effect on heating and cooling. The U-value is going to determine how much the outside temperature affects the inside temperature. You want well insulated windows so on cold or hot days the temperature inside the building isn’t affected. This means you want as low of a U-factor as possible. However, with solar heat gain it gets a lot more complicated. The more solar heat gain you have, the lower your heating bills will be, but the higher your cooling bills will be.

We really don’t care about LEED certification in the least, but we do care about how much it costs to run our house. We’re going with more expensive closed cell foam insulation in the walls, and (as you can see) I’m giving a lot of thought to our window choice in an attempt to reduce the heating and cooling bills. We’re more than happy to put extra money towards stuff that will save us money down the road. So here’s my thinking…

Windows that get almost no direct light…

Windows that get lots of light…

I don’t like to be in overly sunny rooms. I often cross the street to get out of the sun and I hate sunny places like Arizona and Southern California. So I don’t want a whole lot of visible light transmission on the southern windows. Your taste may differ – many people like direct sun – I’m just not one of them.

The SHGC you want depends on how you have your house arranged. In reading Julia Angwin’s blog on the Wall Street Journal I see she’s taking a very different tack than we are. She specifically said “We chose the south side for our office so we could have good light during the day.” (source)  She and her husband are clearly people who like direct sunlight. In my mind “good light” is indirect northern light, so I want our home office on the north side. I would hate Julia’s south-facing office, but that’s just me… In addition to light issues I want the office on the front because the street is noisy and I can tolerate more noise in the office than I can in the bedroom when I’m trying to sleep.

I say all of that for a purpose. How you arrange your house will have an impact on what SHGC value you shoot for on your southern windows. In our case our primary daytime room (the home office) will be on the north side of the building. Solar heat gain is not going to affect our air conditioning bills too much on weekdays because we’re not in sunny rooms during the day – just maybe a bit on weekends when we use more rooms in the house during peak cooling hours. On the other hand Julia Angwin is spending time during peak cooling hours in a south facing room. A low SHGC value is far more important to her than it is to us.

In addition, unlike Julia and her husband, we’ll be providing heat for our ground floor tenants. On top of that, since we’re going with a mini-split system for cooling every room will be a zone for cooling and we can just cool the room(s) we’re in. But heating will be more general. While we can turn off the rads in rooms, there’s a certain level of heat we have to maintain throughout the house.

As a result, I’m expecting heating to be a bigger expense than cooling. That means we’ll benefit by having somewhat higher SHGC values on the south facing windows… If you look at the graphic above you’ll see the two scenarios where the heating cost was below $800 had very different SHGC values – 0.40 in one case and 0.56 in the other. Lower isn’t necessarily better when it comes to SHGC. If you’re in Miami it is, but not NYC.

The other issue that’s important to us when it comes to windows is how much UV is blocked. I remember visiting my sister’s friend’s apartment when I was in college. They had an incredible place in San Francisco with water views. Problem was their windows let through too much UV and it ruined a Matisse color block collage they had bought. We’re a bit paranoid about UV affecting our art and furniture. That means that UV protection will be a huge issue for us on south facing windows (and somewhat on north facing windows).

And to make things even more complicated, I think we’ll be getting Gaulhofer windows (from Austria) and Europeans measure a lot of these values differently (especially SHGC) so I’ve been struggling to convert European values into US values. But Gaulhofers are just incredible windows – their standard window is tilt-n-turn (an inswing casement that can also open a little at the top to allow ventilation), and they’re made with furniture grade wood – not the cheap crappy pine Marvin and Andersen use.

The bottom line is there are a lot of factors you should consider when picking windows and it gets a bit confusing to balance all the different criteria. But if you give it some thought it starts to make sense…