After a VERY VERY long time waiting, we finally closed on our brownstone on 123rd Street in Harlem.

We’ve been looking at townhouses in Harlem for about a year now and saw at least 30 different places (not including drive-bys). At first I was only interested in Hamilton Heights and Sugar Hill (aka “West Harlem”) which would have had us near the A, B, C, and D trains at 145th Street. Being two stops from 59th Street (on the A and D) seemed like it would be great. The nice part about Hamilton Heights / Sugar Hill is how stable the area encompassed by the historic district is. It really is lovely, but once you get outside of the historic district it’s hit-or-miss. The bottom line was that there was  nothing available in our price range on a block we wanted to live on. I’ll be doing blog posts in the near future on the various places we looked at and the reasons why they didn’t work out…

I really didn’t know that much about Central Harlem, but as Hamilton Heights & Sugar Hill started drying up we started looking at places further south and east. Strivers’ Row is stunning, but it wasn’t quite in our price range and the subway access was a bit bleak. Strivers’ Row townhouses do have garages, but that doesn’t help the people we want to visit us and work for us. The other issue in Central Harlem were the rather large and ugly housing projects that were built in the 1950s. I just refused to live in a place where I’d have to walk past something like that all the time. Other places were on the 2/3 train and while that was OK, it wasn’t as good as being on the A, B, C, D.

In early October our (wonderful) broker, Maria McCallister of Barak Realty, suggested we look at 168 West 123rd Street. Up to that point I had found most of the places we looked at. I’m not quite sure why I kept skipping over that particular listing, but (obviously) I’m quite happy she suggested it. As I went over the details of the property I realized the location was pretty incredible. It wasn’t near any big housing projects and it was within easy walking distance of the 2, 3, A, B, C and D trains. And since this was Central Harlem it was just 1 stop from 59th Street on the A & D trains. And the 2/3 gives us great access to the Upper West Side.

The building had the critical “certificate of no harassment” that you need to convert the building to 2 family. There is public housing close to our place, but it’s the type of building that you don’t know is public housing unless someone tells you or you’re particularly well-versed in the tell-tale signs. I knew the townhouse was one of a group of townhouses that were all being sold by the same owner – TPE Townhouses Harlem. At the time I didn’t know much about TPE or the story behind those particular townhouses. In the coming months I’d learn a lot more about them than I ever wanted to…

When we looked at the building we realized it was a total shell. There were no floors, no windows, not much of anything – just 4 walls, a leaky roof, and some rotting floor joists. It was sorta cool – you walked down into the cellar and looked up 60 feet to the roof. It was somehow very peaceful and had a strange beauty about it. Here’s a picture of the interior – it’s the view looking up. The timber you see are old floor joists (they happen to be some of the better, less rotted ones)… 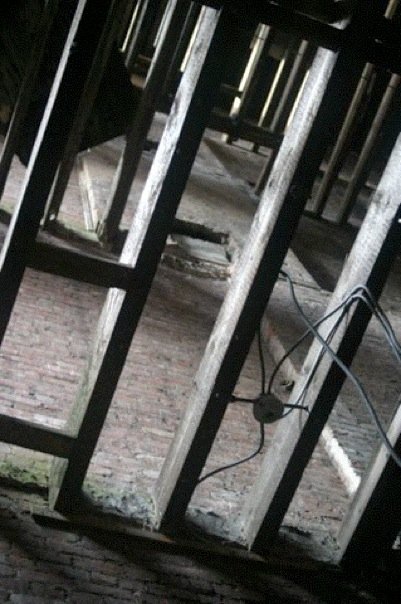 As you can see, there are no “original details” to preserve. In other places there may be plaster walls, or original tile work, or old fireplaces. While we would have been game to take on a project with original details, they do create a bit of a problem since you have to do the construction somewhat surgically in order to preserve them, which will increase cost somewhat. None of that is necessary here. It also gives us a completely blank slate to construct whatever we want (and can afford).

The good part is that people with total shells are more realistic about the value of their place than other people are. Finding realistic sellers was one of the many problems we encountered in our search. Most owners just didn’t (want to) realize how far the values of their places had fallen since the height two years before. The reason we bought was because values were down about 65% from their high in 2007. That’s a hard pill to swallow for owners. Estates were some of the only people who were being realistic.

Another seller that was being pretty realistic was TPE Townhouses Harlem. They had purchased 11 townhouse shells in 2004 – 2005. They were all townhouses that had been involved in mortgage fraud starting in the early ’90s. Unbelievably the mortgage fraud was perpetuated by churches who typically would buy townhouses at inflated prices from accomplices and then take out the maximum federally-insured mortgages which they would promptly never pay. The church involved in the TPE Townhouses was Beulah Church Of God In Christ Jesus. I do not know the particular details of the Beulah case – just how it turned out. Based on how it turned out there’s a very good chance Beulah didn’t actually commit the fraud, but again – I don’t know. In some of the cases people would forge documents pretending to be the churches so the churches were involved but not guilty of any wrong doing. I do know there was a court decision in 2002 that determined that Beulah was the actual owner of the properties. TPE bought our particular townhouse from Beulah in 2004 for $1.13M.

TPE then seems to have wasted the next three years of opportunity. They could have developed and sold the properties at the height of the market in 2007 for a huge profit. In 2005 they took out a blanket mortgage on 11 townhouses for a total of $14.3M. They’ve developed the two most valuable buildings that are over on Frederick Douglass Blvd (8th Avenue) in the heart of “SoHa” (South Harlem – the new and upcoming area in Harlem that’s been recently gentrified), but they only did that development recently. The other 9 townhouses they decided to sell just before the market crashed.

TPE put our place on the market in July of 2008 for $1.1M. In November they lowered it to $995K. In March of 2009 they lowered it to $895K and a week later reduced it again to $795K where it stayed for quite a while. We saw the place for the first time on 10/15 and put in an admittedly low-ball offer of $450K the next day. It was rejected and we were told our offer “needed to start with a 5”. Almost 3 weeks later, on 11/5, we came back with an offer of $500K. We then continued to take our time negotiating the price because some other properties came up that we were interested in. On 11/13 they reduced the price $100K to $695K most likely trying to see if anyone else would come in with a higher bid. At this point we gave our broker a ceiling price that we couldn’t go over and told her to see what she could do. By this point in our relationship with Maria we knew she was very good at negotiating price and we trusted her. After a few rounds of negotiation, the day after Thanksgiving (11/27) we got the call that the seller accepted a price of $530K. (That’s less than half what they paid for it in 2004 and what they listed it for a year an a half before).

We were thinking that since it was technically an all cash deal we might close before the end of the year. Boy, were we wrong! First things were slowed down by TPE telling their lawyers to put as little time into the closing as possible to reduce costs. I should mention that TPE is Tahl Propp Equities which is a big Harlem landlord that seems to own over 100 buildings in Harlem alone as well as some fairly large office buildings in Midtown. Tahl comes from a well-established NY real estate family. Propp was one of Donald Trump’s lawyers at one point. This sale was pretty insignificant to their overall operations.

Then we hit a wall with title issues. Given the sordid legal history of the building our lawyer insisted in using his own title agent and insurance company – not the one TPE was insisting we use. In fact, they wouldn’t even go into contract unless we either settled the title insurance issue or used their title company. So we waited. In a hotter market not being in contract would have been dangerous. But in this particular case we were pretty safe. It wasn’t in the best interest of the seller or the seller’s broker to get another offer on the place. They still have about a half dozen similar properties to sell. It’s much better that they make two sales than one at a slightly higher price.

It wasn’t until early February that the title issues got settled. The seller’s title company was actually a pretty good company so now we have two big, solid title companies that think the building is OK, which will help when we go to sell. We signed the contract during the (first) big snowstorm on 2/10 and the seller’s signed a week later on 2/18 and we closed yesterday, 3/3.

The closing was actually a bit up in the air there for a little while. Apparently the seller’s bank was giving them difficulty about it. Remember, they initially had a $14.3M mortgage covering 11 buildings. They’ve developed two of the buildings, and sold maybe half the others ones. It makes me wonder how well that loan is collateralized these days… I know our final payment went 100% to the bank (The Community Preservation Corp). I’m guessing a fair amount of the deposit went to the bank as well.

So now we’re working on plans with our architect. More on that soon…

Just some basic info on the building – It’s 15 feet wide, 5 stories tall (most are 4 stories). The usable interior space will be about 13 feet in width. It’s longer than most townhouses – 58 feet. That means we can have decent sized bedrooms of 200+ sq. ft. The ground floor and part of the cellar will be a rental unit (residential or commercial) which will help offset the cost of the mortgage.

Here are some pictures of the front and back of the building. The big window on the parlor level is nearly 8 feet tall and 4 feet wide! The front of the building faces north. You can see in the picture how there’s an alleyway between us and the apartment building to the right. This will be helpful since we can punch holes in the wall and have windows in the bathrooms, and vents for the kitchen range hoods. 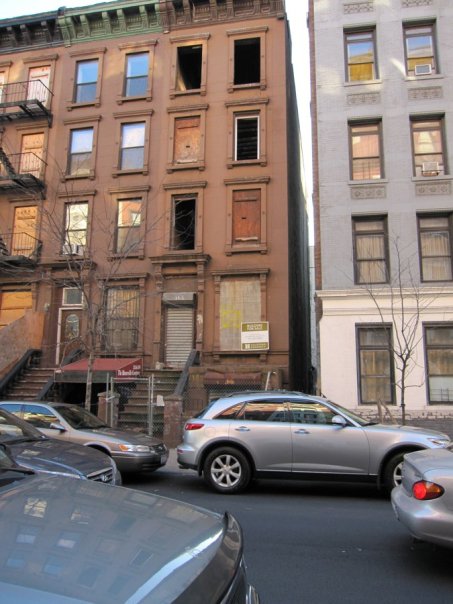 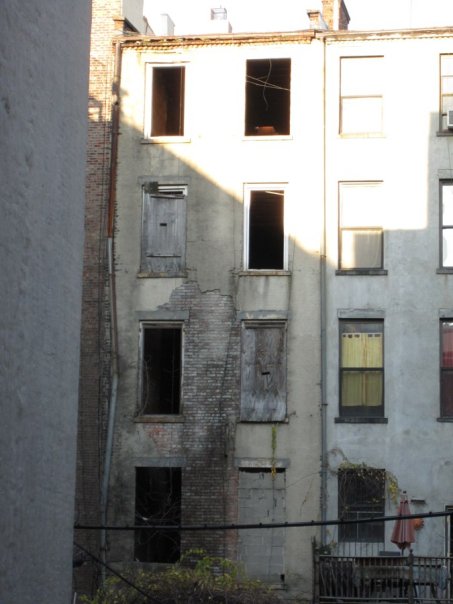 It’s a huge project, but it’ll be fun and the end result will be pretty spectacular. And no, we’re not doing the work ourselves. Everyone seems to ask that but it’s an absurd question… Just monitoring the work and choosing finishing materials will require an incredible amount of time.

1 thought on “West 123rd Street Brownstone Is Now Ours!”