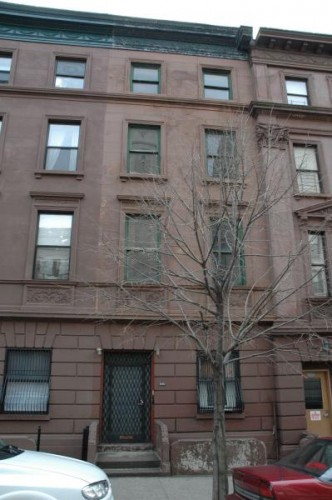 So what do you get for the extra $120/sq. ft.? You get original details and a better location. This building still isn’t in the Sugar Hill historic district, and the buildings immediately west (542-548) are low-income housing. But unlike the 152nd Street property the block is predominantly brownstones / townhouses. The low-income housing next door is very nicely done (though they have the tell-tale wheelchair ramps you rarely find with owner-occupied houses). And the ever critical subway access is somewhat better than the 152nd Street property – just a 7 minute walk to the A/B/C/D express trains @ 145 and 5 minutes to the 1 train @ 145.

If I had to guess I would say original details probably made the biggest difference in the price. Mind you, the property still needs a complete gut renovation, but you’re not starting from scratch – you’ve got floors and walls, crown mouldings, fireplaces, doors, etc… Here are some pictures that show what I’m talking about… 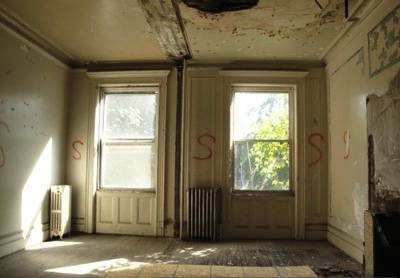 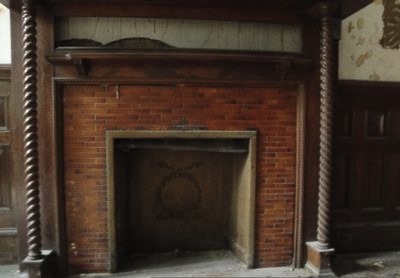 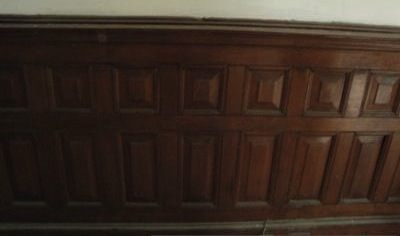 That’s a very different renovation than the one that will be needed at 535 West 152. At 152 the new owner is probably starting from scratch (like we our with our place) – rebuilding all the floors, the walls, the roof, etc. With this place it’s more about restoration – repairing what’s there and adapting it for modern use. It will still need all new electrical and plumbing. There will be rotten floor joists that have to be replaced, etc.

The place on 152 is best suited for someone who wants a rental property – since it has more square footage than any homeowner would ever need and the block is predominately a rental block. This place would appeal more to a homeowner who wants a wonderful old place that needs TLC.

I think someone just got a pretty good deal on a Harlem townhouse shell… 535 West 152nd Street just sold for $490K. While the number may seem like it’s inline with other shell prices, apparently the place has 6,290 sq. ft. despite the fact that it’s just 16 2/3 feet wide and just 4 stories. That’s almost double the square footage of many Harlem townhouses. The place has an extension that stretches back 90 feet. So given the +/- 5 foot set back in the front – that’s nearly 100% lot coverage (though I’m sure there’s some sort of side yard).

The reason why this place went for such a reasonable price was because the seller was realistic about the place’s value. The seller was the same developer we purchased our townhouse from – TPE Townhouses Harlem (TPE is part of Tahl Propp – a big Harlem landlord). This was possibly the last of about a dozen townhouse shells they were selling. They weren’t giving away the townhouses, but they knew to sell a dozen shells you gotta take the best offer – even if it seems low.

Just to put this building in perspective… It’s outside the landmark district, and not all that close to subways – it’s a 6 minute walk to the 1 train at 157, 7 minutes to the C train at 155, and 8 minutes to the A/B/C/D trains at 145. The block it’s on is also mostly apartment buildings – not the charming tree-lined brownstone blocks you find elsewhere in Harlem. So it’s sorta lacking on location.

So there are great deals out there still. Now that I’ve got my real estate license and have access to all the listing databases it’s interesting to see what’s on the market. There are some interesting opportunities out there – but as always price continues to be an issue, as is matching the building to the particular needs of the buyer…

MAJOR CORRECTION: I’m going to sticky this post for a few days. Max loans aren’t going down nearly as much as I thought they were. So the situation isn’t all that dire. It’s worse, but not all that much worse… Essentially the limits on conforming loans are going down just 15% after September 30. I’ve stricken the parts that were wrong, and put corrections in italics.

The big news today was that it seems there’s bipartisan support for lowering the loan limits for Fannie and Freddie in high cost areas like New York. Assuming it happens, it could have a rather profound effect on places like New York – and it will particularly affect Harlem townhouse shells where many of us depend on the higher loan limits to make the numbers work and the banks avoid the risk of renovation loans.

What that means is that fewer people will be able to buy townhouses since they won’t be able to qualify for federally insured mortgages that cover enough of the costs. They will have to try to get mortgages from banks that will require much larger down payments, higher incomes, and overall much less risk for the banks. There already is no such thing as a jumbo renovation loan – so renovation loans will really dry up are less likely to cover the cost of renovation come this fall. Somewhat less demand means real estate prices will could drop slightly (because of this). Properties like shells that are particularly risky will probably see the biggest drops are the most likely to be affected.

This is major will have real effects on Harlem townhouses…

Those of us who have already bought will could see the prices of our homes drop in value since there will be less competition among buyers slightly fewer buyers will be able to get the size of loans they need.

People who are buying will find it somewhat harder to get mortgages that cover all the expenses. A lot of people just won’t qualify. We wouldn’t qualify be able to do the renovation we want to do under the new rules. It doesn’t mean the buyers can’t afford the homes. Our place will actually be quite affordable once it’s all done. It’s just that the renovation process is a risk no bank wants to take on.

My advice to people who own shells that are on the market is SELL NOW! realize after September 30 the value of your place may go down even further. If you’re holding that property after September 30, you’re probably going to hold it for quite a while into the future and it will sell for substantially less money. Now is not the time to be greedy.

If you own a shell and haven’t closed on your rehab mortgage – do everything what you can to close the mortgage before September 30 – otherwise you may not be able to do as nice of a renovation.

If you’re in the market for a shell – that’s a tough one… After September 30 you may not be able to afford a townhouse at all. But closing on a rehab mortgage takes time. You need approved plans (which can take months to get), you need a contractor who’s ready to start, etc. And on top of it all it’s possible the place you buy could drop in value shortly after you buy it.

The same goes for renovated townhouses, but to a lesser degree – the situation won’t be quite as dire for livable places Renovated townhouse may not feel the hit much at all since jumbo mortgages will be available for them (just a little harder to get).

After September 30 cash will continue to be king (even more than it is now). You’ll need a large down payment PLUS pretty substantial income. It’s sorta sad really. The current crop of homeowners who are buying and renovating shells are often pretty regular Joes… A lot of them will just be priced out of the market.

I feel fortunate that we bought when we did and got our loan closed when we did. Yes, our place will most likely go down in value, but renovated places will fair better than shells since banks will be still be lending on regular, non-rehab mortgages. We’ve always taken a long-range view of the townhouse purchase. It will still be affordable for us after we get done. And I’m not sure any of this will matter in 15 or 20 years and we have every intention of living in our place for that long…

Hopefully something will happen to derail the support for these changes. It’s being implemented all wrong… They should take everyone down slowly. They way they’re proposing will hurt places like California and New York and not change anything for middle America. Hopefully common sense will prevail and none of this will come to reality. But from the sounds of it, it’s a done deal.

This past Saturday we had architecture students from CityTech come see the house. Dan’s a (web design) professor at CityTech and one of the architecture professors (Ken Conzelmann) took the photo below. I think it’s pretty cool – with the light streaming through the joists it’s quite beautiful… 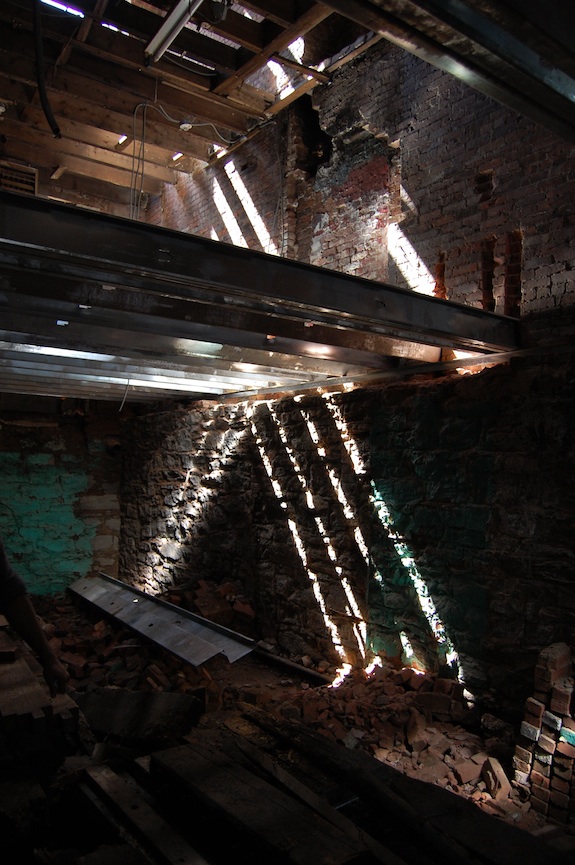 I love the height of everything, but of course that will go away with the renovation since floors will go in.

The “hole” in the wall is an old fireplace. The previous owner (a developer/landlord) had pretty much ripped it out. We’ll fill the hole back in with brick to make the wall stronger.

You can also see that we’re raising the floor between the cellar and basement to give a full 8′ clearance in the cellar. The joists used to rest on top of the foundation – now they’re a few inches higher.

Construction has FINALLY started! It almost seems unreal – it’s taken so long to get to his point…

The first item of business was replacing the old construction fence which was an active violation because it hasn’t been built properly. Here’s the old fence… 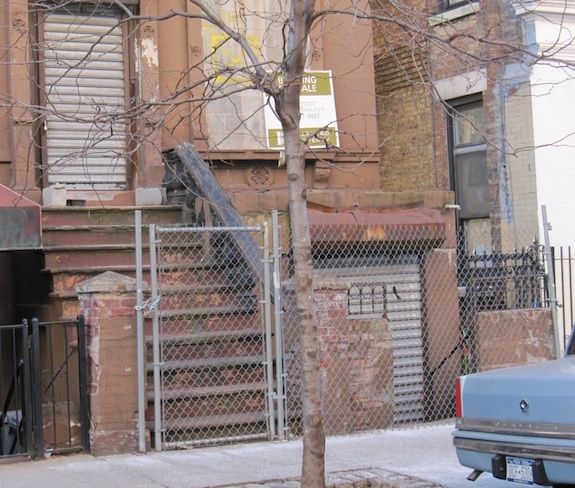 The new fence is a thing of beauty… Our contractor built it on Friday and then painted it and put the signs up Monday morning (he didn’t even spill a drop of paint on the sidewalk). Nice color choice too! 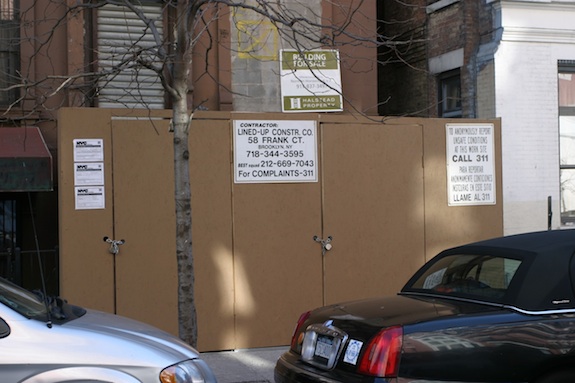 The guy two doors down put up a construction fence and it looks awful (need to get a pic of it).

Next up was the joists between the cellar and the basement. Here’s a picture of what we started with… 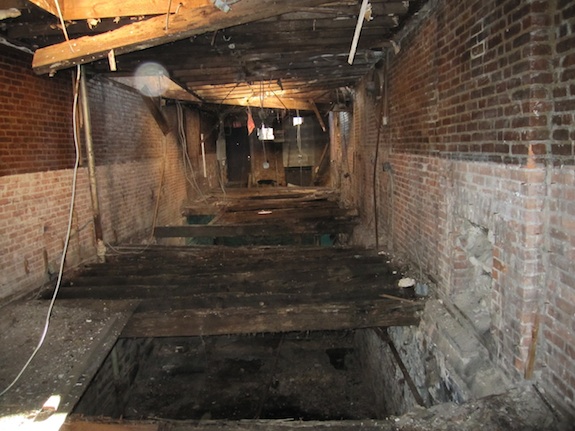 The joists are being “replaced as necessary”. As you can see they were so rotten, it was necessary to replace all of them… 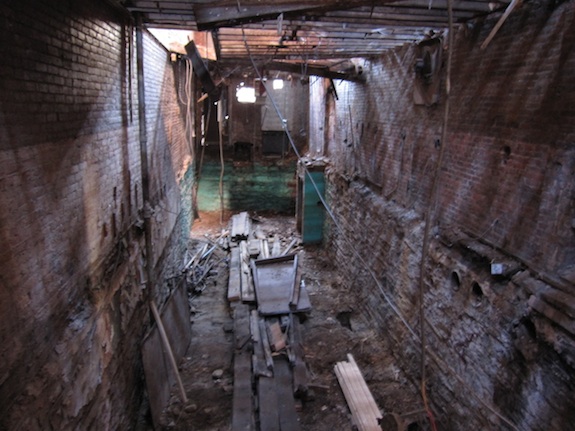 It feels very tall and narrow… We’re going to cut down and use the old joists to build a screen between the hallways and the stairwell in our unit. So you can see in the picture they’re being stored for later use. The joists may not be good enough to be joists anymore, but their “good parts” will still be in the building when we’re done. Not exactly “original details”, but it will be original materials – we just don’t have much to work with given the condition of our building.

And if you’re worried about how many joists we’re taking out at once… It’s been discussed and we’re trying to be conservative about it. The issue is that the joist pockets are being leveled with a laser leveling device, so it helps to have them all out. Once we get up further in the building we’ll just take half our at a time since after the first two floors the floors will basically be in two sections – front and back.

Today and Wednesday the contractor will be prepping the joist pockets and taking down the remnants of the old fireplace in the cellar. Thursday he’ll put in the new joists, and Friday we’ll probably have a floor to walk on. (Imagine that… lol) At that point he can get to the back yard more easily, etc.