If you own a townhouse in Harlem you’ll be happy to hear that the market has hit bottom and is now starting to go back up. A few months ago I pulled a list of Harlem townhouses that had sold over $1M and the list was pretty short (only 5), the highest price was just under $1.7M and the price per square foot was pretty miserable. PRIME locations like Strivers’ Row were getting in the mid-$300s/sq. ft. and ones that needed significant TLC on decent blocks (like Hamilton Terrace) were selling for just under $300/sq. ft.

Well, if you bought at those prices I think you bought at the bottom of the market. Things are much better now. The number of sales over $1M has doubled to 10 for the past 6 months and at least one of the properties is back over $500/sq. ft.

And here they are…

So there you have it – the top sales for the past 6 months for Harlem townhouses. Considering that just about every week a townhouse will sell in Brooklyn for over $2M, that’s sorta a sad lot by comparison, but at least things are better than they were a few months ago.

Where things are selling…

It’s also interesting to note that none of the sales were in Hamilton Heights / Sugar Hill. 6 of the 10 were south of 125th in and around the Mt. Morris Historic District. Given that our place is in the same area the good news is that we’ll have no problem with the future value appraisal for our rehab loan. It would seem our place will be worth about $400/sq. ft. when it’s completed.

Prices on shells will go up too…

That brings up another point… The sum total of all of these numbers is that when the top end of the market goes up, everyone goes up.  Let’s take our case. When we were bidding I was thinking our place would be worth maybe $325-350/sq. ft. when it was done. So if we put $150-200/sq. ft. into it I had to subtract that from the finished value for things to make sense. We bought at $122/sq. ft. so we’d be safe no matter how you looked at it (provided the market didn’t continue to go down). Now that the top number is $400/sq. ft. things are significantly better.

I still think the biggest risk are the ones in the middle that need more work than you might think. It’s still easy to over pay for those properties. The best bets are shells and ones that are recently renovated.

Unless there’s more economic turbulence, I’m firmly convinced now is the time to buy a Harlem townhouse. The trick is finding one in a decent area, without SRO issues, where they’ll sell low. 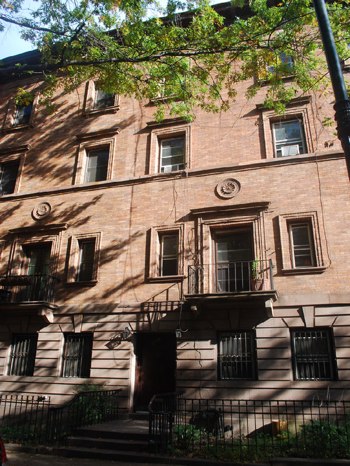