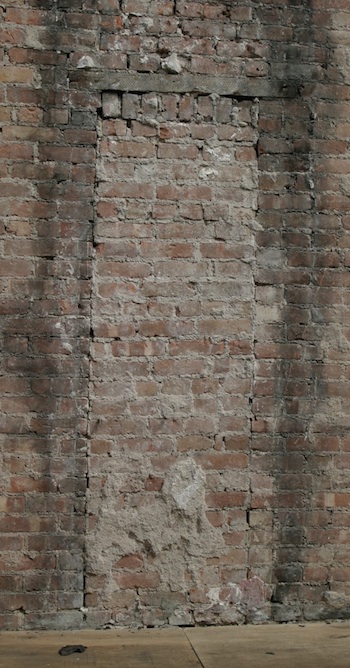 One interesting detail we’ve seen in a number of Harlem townhouses that have exposed brick walls are old, original, bricked up doorways between the townhouses (see photo on right).

The old buildings you see in Harlem were built by speculative developers during a real estate boom (yes, that concept is nothing new). Developers would buy a parcel of land and sub-divide it by putting a number of townhouses up at once. Generally all of them would be identical, or just differ in minor ways.

Because they were building several buildings at once they’d put in passageways so the workers could go from one house to the next quickly. Then towards the end of the project all the doorsways would be all bricked up before the walls were plastered.

We have one of these on every floor. The lintels are in a variety of conditions. Originally they were wood. Some are in good condition, others are rotten and need to be replaced. One of them had the wood pulled out and brick put in (because it was in a kitchenette – which was a good thing since that’s where a major fire started).

Our doorways will still be visible when we’re done since we’re leaving the party wall as exposed brick. The old doorways will give the brick walls a little more character and may even prompt a question or two from observant guests.