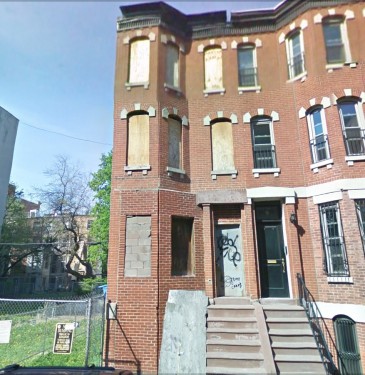 During our search we went through the one 2 doors down – 7 West 119th Street. It was fully renovated with some high end finishes (Sub Zero fridge, but just “better than rental” cabinetry). It wound up selling for $1.0983M. It’s hard to figure out the square footage of #7. Officially it’s 2,794 sq. ft. so it officially sold for $393/sq. ft. However, the City has it’s length at 47′ when all it’s sibling neighbors are officially 38′. I don’t remember it being pushed out in the back and the permit they pulled said no enlargement was proposed. It’s on a lot with a diagonal back line – one side it’s 54′ deep, the other it’s 58′ deep. I remember the back yard basically being a small deck, but it the short side was definitely more than 7′ feet long. So I really think the square footage of #7 is smaller and more inline with it’s neighbors. On top of everything else they did a double height living room so it was probably under 2,000 of real square feet. If it were 2,000 sq. ft. then the price per square foot would have been $549/sq. ft. which is way over what the other comps support. By comparison the incredible one on Strivers’ Row went for $505/sq. ft.

11 West 119th is a SMALL townhouse that shouldn’t be made into more than a single family home (#7 was made into a 2 family with a tiny studio apartment and I think it was a mistake). It’s not not in a historic district (though it is literally adjacent to a one). It’s steps from East Harlem where values are somewhat lower. It’s across the street from (relatively nice) public housing. So I’m not seeing how the property commanded $188/sq. ft. But with both #7 and #11 selling way over what the comps support — apparently they’re smoking really good over at that end of West 119th Street!  😉

No matter – this is a great comp for those of us who own townhouses. Be happy! And for the new owners of #7 and #11 West 119th Street – the values will go up in the coming years and they’ll still make money when they sell.

But honestly – if you’re looking to buy a Harlem townhouse shell – get a damn good real estate broker and a subscription to Property Shark that includes comps and really get to know what things are actually selling for (as opposed to what they’re listed for). A Property Shark membership is WAY cheaper than overpaying for real estate.

2 thoughts on “Surprisingly High Comp For A Harlem Townhouse Shell”