Things are still progressing a little slowly, but nevertheless a few things moved forward in the past week…

The roof deck is starting to almost look complete. Soon the only thing that will be missing are the windows/door (and some lighting). It’s sorta calming to have something that’s almost “done”. 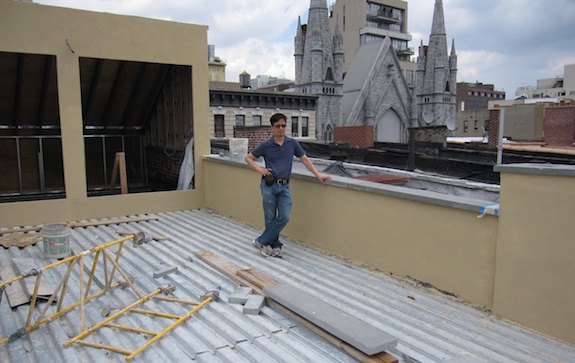 Pretty much all the stucco is done. The new bluestone cap stones are in place (and look great). We were wondering what color the roof should be. There are  a number “cool roof” options, but seeing the stone and the stucco we’re agreed the roof should be a light grey. The stucco is actually more yellow than it looks in the picture – somehow the bluestone really brings out the yellow in it. So the gray will keep the color palette fairly simple.

The Back Porch Footing / Cellar Lightwell

Another thing that went in quickly and is looking semi-complete is the footing for the rear deck, which is also the lightwell for the cellar windows… 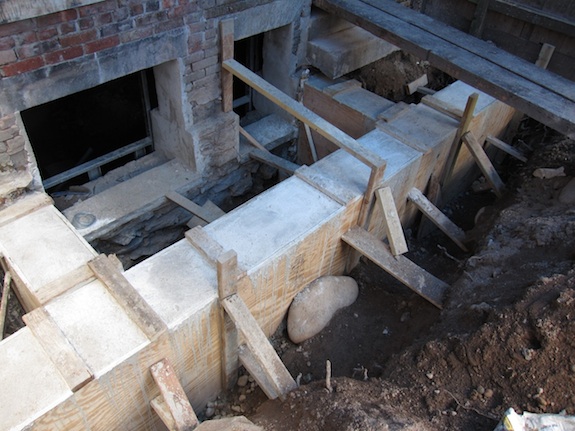 As you can see, the rear deck off the parlor isn’t very big – just 4 feet deep – enough for a couple chairs, but real entertaining will happen in the garden.

I was a little worried about the lightwell/footing affecting the view from inside, but it’s not bad – all the dirt in the picture below will be graded level and we’ll keep the plants in that area pretty low so the tenant should still get decent light. 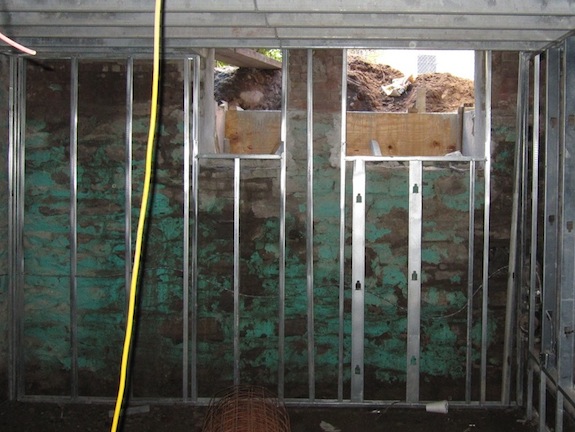 The closer you get to the window the more sky you get, so what you see in the picture is a worst case scenario, though the window framing will take a fair amount of the space you see now.

The other thing which has progressed are the stairs in our unit. It’s actually a bit of a long story… At one point we wanted a closet opposite the stairs, so the stairs had to be configured differently than they were above, and to get enough height to have a powder room under the stairs the stairs intruded into the kitchen. Then we got rid of the closet in order to have a more open feel on the parlor floor (we’ll just use coat hooks) and we didn’t really think about the fact that that would let us change the configuration of the stairs.

The architect had said at one point that he wanted the stair fabricator to do shop drawings. He sarcastically said “if you don’t do them you’re going to wind up refabricating things when there are problems”. The contractor and stair fabricator took that as a viable option (it’s amazing how much the contractor does and has to redo when it conflicts with something else – it’s just how they work). Long story short the architect later insisted on shop drawings and offered to do them himself, but the fabricator started working before the shop drawings were done. Then the architect realized there was a headroom clearance problem where the stairs intruded into the kitchen so he told them things needed to change. The next day the fabricator went and started installing what he had already come up with, which of course was a problem. Luckily they had agreed to redo things if there were problems so he had to cart away the first set of stairs and come up with a new set.

Now the stairs are configured just like all the other stairs in our unit, though they’re slightly steeper to get clearance under the stairs for the powder room. You can see below that the stairs actually come into the space quite a bit (ignore the wood stairs – they’re just temporary construction stairs). We’re going to go with a pretty minimal railing to keep things open and airy and somewhat loft-like. 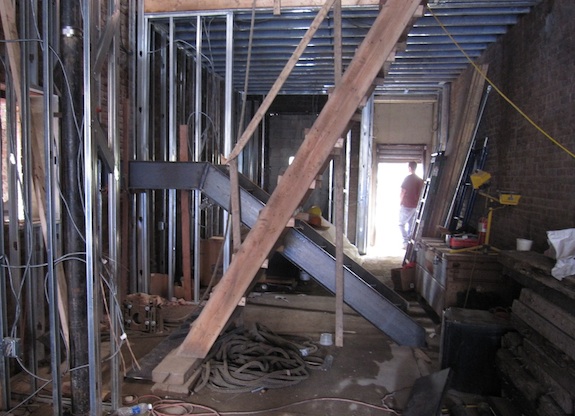 The first batch of stairs the fabricator brought were primed. Dan wanted raw metal with a gun metal blue finish on it, so that’s what’s going in this time. They should look pretty spectacular when they’re done. We’ve always known that they were the primary design element in our unit since they dominate and define a very vertical space (4 stories + up to a roof deck).

We’re away this week (in Toronto). When we come home we hope the first flight of stairs will be done, and progress will have been made on the roof. There’s also a host of other things that the guys can work on – it’ll be interesting to see what else gets done.

We’re finally getting sprinkler plans in this week. Initially we thought we could put them on the domestic water supply and get away with 29 heads. Now we’re up to 38 heads so we need a dedicated sprinkler filing. We also need to finalize the window order and get the deposit to the window company. (It never ends – even when we’re on vacation we’re doing house stuff)…