We stopped by the house yesterday and noticed the cellar storage area now has walls. We have this unusual arrangement where there are two entrances under the stoop – one to the cellar and one to the basement/garden apartment. That means we can have a storage area and a utility room in the cellar and not have to go through the tenant’s apartment to get to them.

The boiler/utility room feels huge – probably far bigger than it needs to be. The storage area feels a bit small – I probably should have pushed the architect to take space from the boiler room and given it to the storage room, but that is what it is… Unfortunately the utility/boiler room is too far from the lot line to have things like sprinkler control valves – they’re (unfortunately) going in the “vault” area (the area with a vaulted brick ceiling under the “front yard”).

Here’s a picture looking back. That’s the new cinder block wall between our storage area and the boiler/utility room. 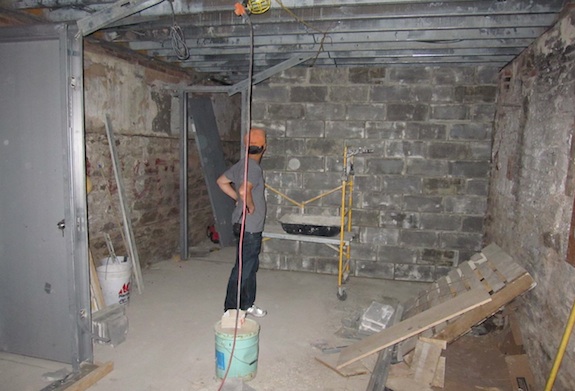 We’re leaving the rock walls (foundation) pretty much as they are – not framing them out or anything. That will make it a bit chilly down there in the winter. The wall to the right is actually has air on the other side since the apartment building next door has a below-grade alley way.

There’s graffiti on the rock foundations. In the boiler room there’s a stick figure of a person. To the left in the picture above and to the right in the picture below there’s the words “NO DOPE” – from back when it was a drug house. I think we’ll leave those – just clean the dirt off gently. It’ll be a pretty grungy looking space – but all those layers just give it character. We have to Sheetrock the ceiling (with fireproof Sheetrock). We’re thinking of painting it medium to dark gray – the space is just too grungy for a white ceiling.

And here’s a picture looking forward – you can see how the stairs come down into the cellar from outside. (There will be a wall in there soon.) 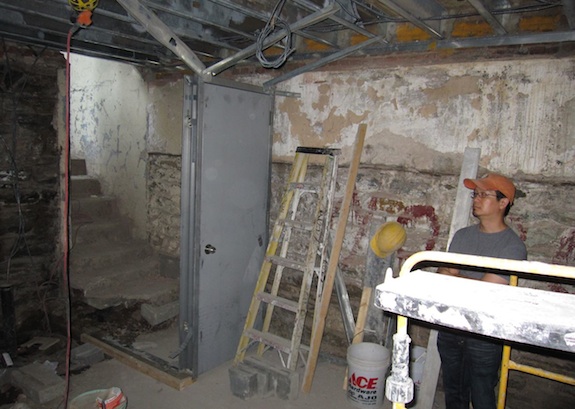 The door was one thing the architect didn’t quite get right, but the contractor caught the problem. The architect had the door in line with the wall, which would have put it in the middle of the stairs. The contractor caught the problem and said we need 36″ of clear space at the bottom in front of the door. The last two steps are a mess and will be rebuilt. It’s a bit of a spooky space to walk down into, but we’ll have a light at the bottom that’s on a motion sensor.

Here’s an somewhat older picture of the other corner of the room and looking into the vault area. There’s a lot that’s going to be going on there. We’ll have gas and electric meters on those boards (we refused to have them outside the building for aesthetic reasons). Then in the vault room along the wall you see will be this huge contraption for sprinkler control. Hopefully all of that will get installed in the next few weeks. 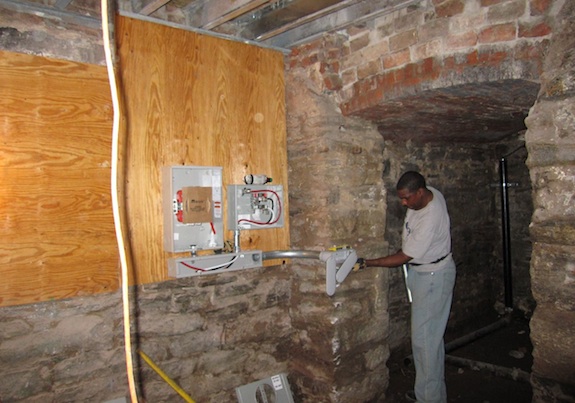 Yesterday I realized the wall wasn’t constructed quite right. There’s supposed to be a 4″ concrete dam at the bottom to prevent something like a hot water tank failure from flooding the rest of the cellar. But it’s too late (unless we ask them to tear down the wall and redo it). On the plus side we were able to get a floor drain into that area (which was unexpected), so maybe my fears of flooding aren’t really an issue. We’ll let the architect make the final determination – but I’m guessing no 4″ dam…

The walls are now complete. Here are some pictures… First the new wall and door at the bottom of the stairs to the outside of the building (under the stoop)… 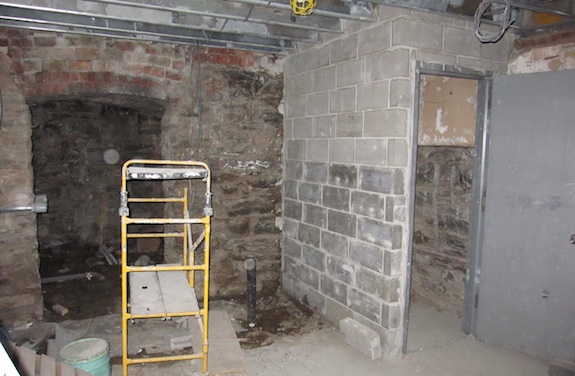 And here you can see the actual staircase… 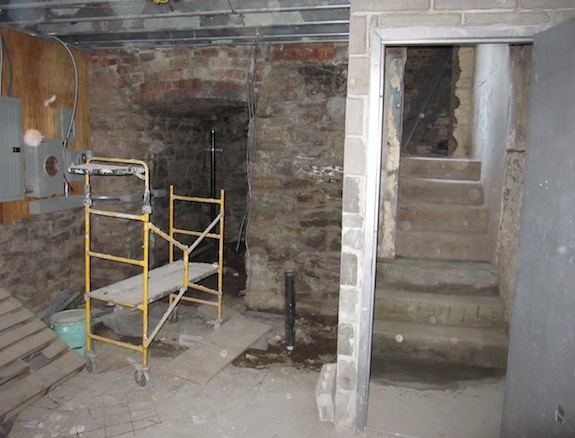 They reconstructed the bottom three stairs – there were only two originally and we lowered the cellar floor a few inches. 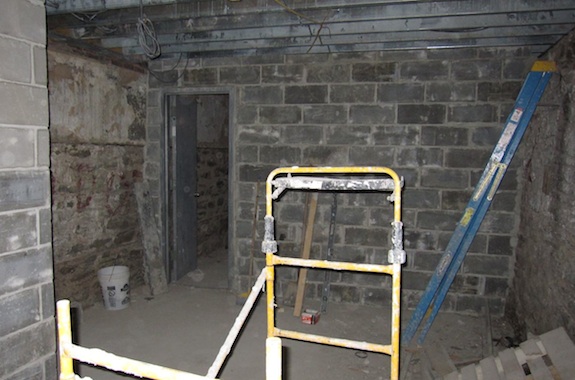 Notice there’s no lip below the door – that entire wall should rest on a 4″ high concrete dam that prevents flooding of the entire basement. We’re now not too concerned – there’s a floor drain in the mechanical room which will prevent any real flooding. If we need to we can put a dam inside the room to keep any leakage from the hot water heaters and boilers from flooding into the rest of the cellar.