We were away for 10 days – up in Toronto visiting friends and family. While we were gone (and in the days since we got back), a number of things have been accomplished. 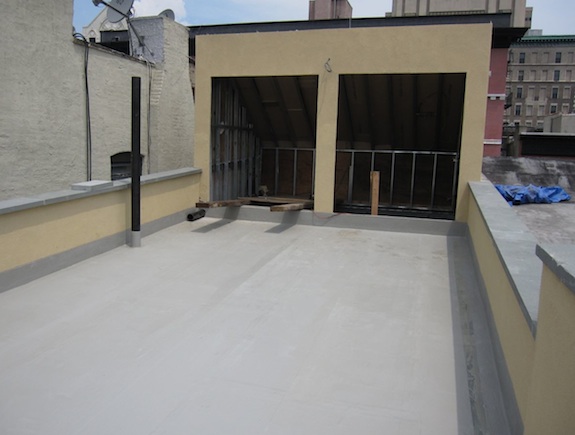 You can see there’s a strip there along the side that’s not quite finished and there will be additional pipes coming up through the roof, plus the bulkhead roof needs to be done. At some point they’ll come back and finish off all the little details, but by-and-large it’s done.

The architect was pleasantly surprised – he had spec’d a more traditional, less expensive roof, but the contractor decided to upgrade us to a Kemper system. The Kemper system is a spray-on resin-based roofing system. It’s quite durable and if you put enough layers of it on they’ll give you an no-questions-asked 30 year warranty. Given how expensive it is, we’re just going with the regular number of layers.

The color is light and fairly reflective, but not white or one of the approved EnergyStar colors. NYC’s white roof rule goes into effect next year. I’m not sure whether we’ll be required to have a different color or not. The contractor has said that if DOB cites us for an unapproved color he’ll paint the roof. The gray does mute the yellow-ness of the stucco somewhat. All in all I think it looks pretty good.

What you can’t see is that under the visible roof are two layers of 2″ rigid foam topped with rigid, waterproof board. That means the roof it currently at about R16 – on it’s way to R39+.

After we get the C of O we’ll flesh out the roof into a proper roof deck. We’re still trying to figure out what’s allowed in that respect and how we want it to look. We really want an ipe deck, but while it was legal for a while there, apparently it’s not technically legal (though apparently it’s very resistant to fire).

Stairs have been a bit of a problem. The guy who’s making them does good work, but he’s not big on formal plans – which is a bit of a problem. The architect wanted him to do shop drawings and long story short he started fabricating before the shop drawings were done and then had to rip out his first attempt. Now he’s on his second attempt and it needs some major revisions because there are details he encountered that should have been worked out in the shop drawings. We’re hoping third time’s a charm. Here’s how they look currently… 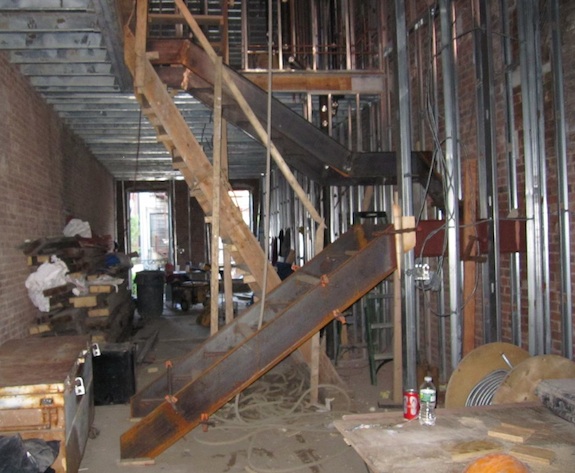 The reason they’re rusty is because Dan wants the stairs to have a gun metal blue finish. Once they’re installed they’ll need to be sanded down and finished with the gun metal blue (and possibly waxed). It’ll be a pretty big job, but it will look great when it’s done. 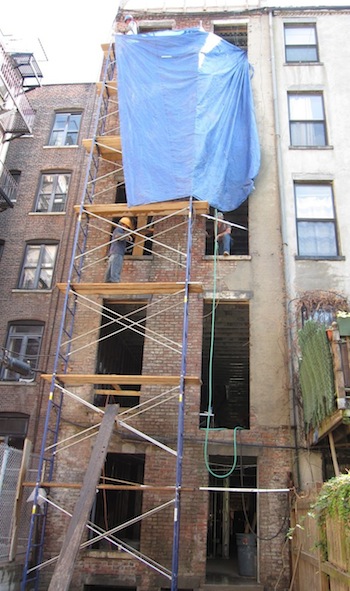 As we looked at townhouses before buying ours I frequently saw renovated townhouses that had beautifully restored brick façades on the back. We’re starting to get to that point ourselves. The contractor has put up scaffolding and is chipping off the old stucco and cleaning the brick. Next week he’ll start repointing. We want to have the the same color mortar that was there was there originally – which was slightly yellowish and pinkish. The brickwork in the house is actually really beautiful when it’s clean, so I have high hopes for the back wall.

Electrical and plumbing work continued while we were gone. And we finally got the window order in on Wednesday. I have a feeling windows will be an issue since they could come in pretty late – probably mid-September. The finishing work (floors, Sheetrock, etc.) can’t be done until the house is sealed up.

The thing that’s holding things back right now is sprinkler approval. We were pleasantly surprised when we were on vacation because the DEP approved our new water main connection much earlier than expected (“only” took a month – rather than the expected two months). But the water main contractor won’t proceed until the sprinkler plans are approved. The earliest that can happen is this week. We’re crossing our fingers about that since all the utilities depend on it since ConEd won’t put in gas and electric until after the water main is done.

5 thoughts on “We Have A Proper Roof! (+ other progress)”