Keeping up with the renovation has been a full time job lately so my blogging has suffered a bit as a result. There are just so many decisions to make as the contractor is back working full steam ahead now that the house is secure. We’re down to making decisions about finished materials, etc.

One welcome development is that drywall started going up a week or so ago. Insulation will be going in soon and the sound insulation in the interior walls will be unfaced and so it needed drywall on one side of the wall to hold it in place. Here’s a few shots of our walls “closing in”… 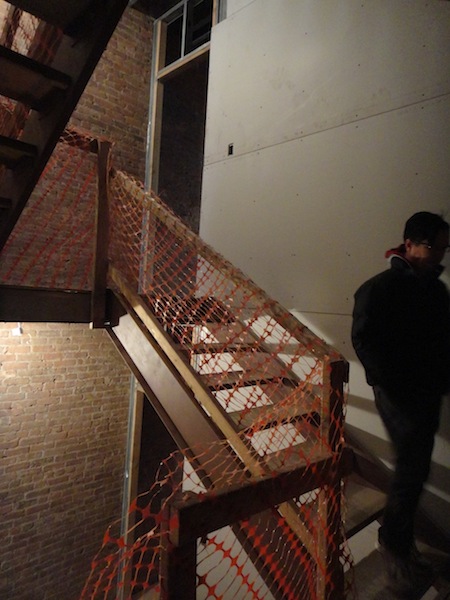 The character of the stairwell changed a lot once it got four defined walls. I wouldn’t say it’s worse – it’s now it’s own defined space… I should mention that when it’s all done it will be all white – except the exposed brick wall, the old joists we’re reusing between the hallway and the stairs, and the wood floors / stair treads. The steel will be painted white, the walls will be an off-white, and the plexiglass panels on the sides of the stairs will also be white. So it’s got a ways go go – but it’s starting to take shape. 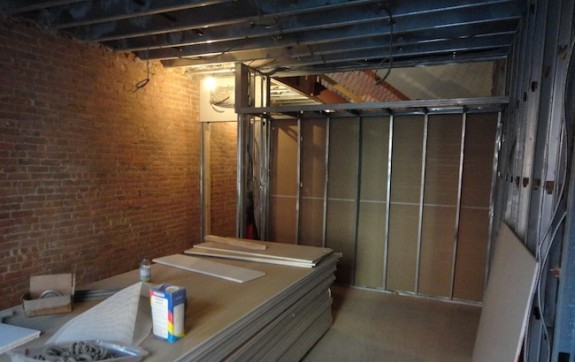 The picture above is the den. It will have a clerestory window at the top of that wall to let a little light in. The room above it will get flooded with light but with the den there will be much less light since the light has to bounce around the stairwell to reach the den. 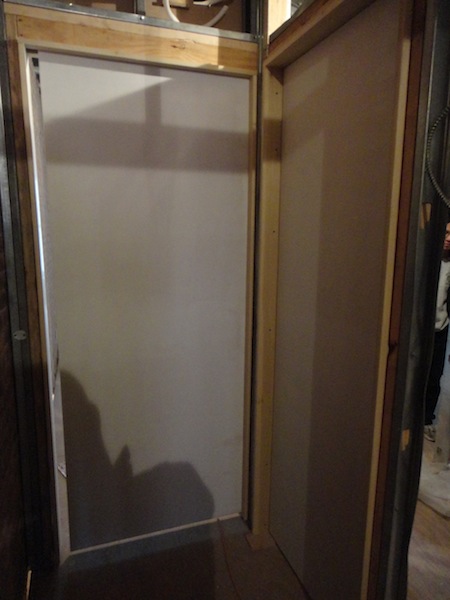 What you see above is a pocket door (to the left) and a bathroom door (to the right). There’s a delay on the doors in the stairwell ’cause they need to have a 45 min fire rating which requires special fire-treated wood for the frames. (Metal frames wouldn’t work with the aesthetic we’re shooting for).

In case you’re wondering, we debated it and decided to go with painted doors instead of wood doors. They should be less expensive – though priming and painting is nearly as expensive the upgrade for the wood laminate. One thing we are doing is using solid core doors throughout the house – usually 1 3/4″ thick. Only on closets do we go down to 1 3/8″. So the doors will feel nice and solid.

We’re not going to have window and door mouldings in the house. Instead we’ll have thin reveals around windows and doors, and above the baseboard (which will be flush with the drywall). It’s less material, but more work… And the Z-Beads you need for the reveals are apparently rather expensive. 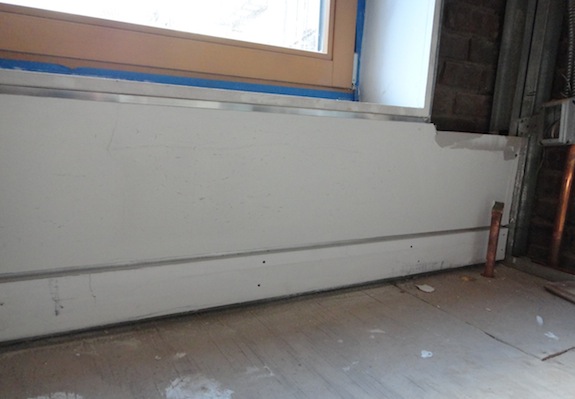 In the picture above you can see two reveals – one just below the window, and one just above the baseboard. The baseboard looks like more drywall, but it’s not – it’s primed wood. Since we’ll paint the baseboard the same color as the walls (though a bit glossier) the effect will be that we don’t have a baseboard even though we do have one. The reveals will also be painted – they won’t remain the metallic color.

You can also see that they’ve been working on the plumbing for the rads. The copper pipe sticking up through the floor is radiator piping. The boiler got delivered today, so hopefully we’ll have heat soon.

The radiators remind me… What’s a little funny is the amount of European fixtures we’re installing… The rads are from Switzerland (Runtal), the sinks in our bathrooms are from Italy (Lacava), our plumbing fixtures are from Germany (Grohe + Bosh dishwasher), our windows are Austrian (Gaulhofer), the stairwell lights are Italian (Luce Plan)… And it’s not just the high-end stuff. Our Ikea cabinets are Swedish. And when I bought Electrolux appliances I thought I was going with an American company, but then a friend pointed out that Electrolux is also Swedish. However, if we had a bigger budget we would have gotten Wolf & Sub-Zero – which are American. Even the firewood we’ve been getting (from multiple sources) comes from Europe – that one makes no sense to me at all…

There are some American things going in – plumbing fixtures for the rental are American Standard, our tub and kitchen sinks are Kohler, the boiler (Slant/Fin) and water heaters (AO Smith) will be American, much of the lighting will be American (Juno, Lutron), etc. But the overwhelming trend is European. The question is why don’t more American companies have products that appeal to people like us? It’s not like we’re trying to buy European – it’s just seems to work out that way.

A day or so after I wrote the blog post another wall closed in – the one around the fireplace. It looks very different now – more like a real fireplace… 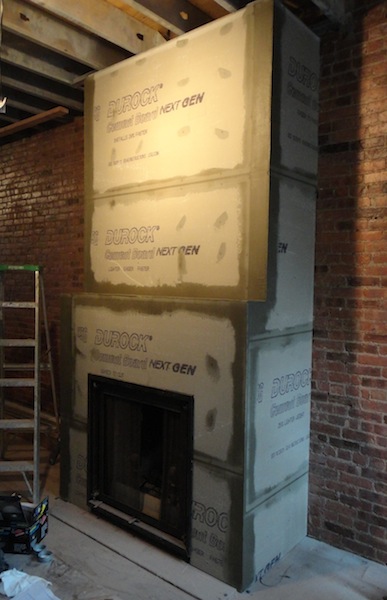 The objective it to cover that with limestone.

1 thought on “The Walls Are Closing In!”