I thought I’d share how we finally decided to (re)configure our townhouse… It’s a 5 story brownstone. We’ll have a 4 story owner’s quadraplex over a duplex rental unit (that has “accessory” space in the cellar)… 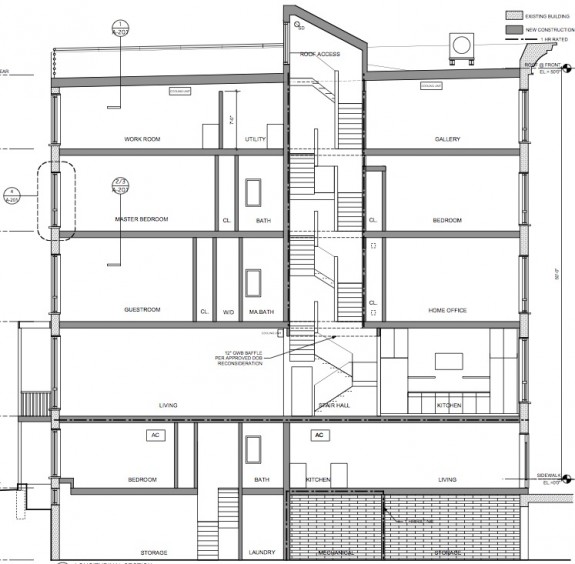 Starting at the top… There will be a roof deck on the rear of the building. We only learned after buying the building that we had views of the midtown skyline (off in the distance). Mind you, climbing up all those stairs to get there won’t be a lot of fun, which means we’ll need some sorta buzzer system for the front door. We’ll eventually mount a retractable awning on the bulkhead for shade. We opted for bulkhead windows instead of a skylight because they let in more light in the winter and less in the summer.

There is some dispute on the proper width of the bulkhead. The architect has a 3 foot passage to the side of it, the plan examiner says it’s a “side yard” and should have an 8 foot passage OR be the entire width of the building with a ladder over it. The architect noted that if he encloses the walkway it becomes interior space and 3 feet is appropriate. We’re still trying to figure out which solution we want to go with.

The next floor down, the 4th floor of our unit (8-9′ ceilings), will be art studio space for Dan. He’ll have a clean studio / office in the front of the building, and a dirty studio in the rear of the building. The small utility room in the middle will be his wet area. The floors in all his studio space will be commercial grade vinyl flooring (inexpensive and practical). There will be clerestory windows letting lighting from the stairwell into the front room (which is on the North side of the building). We’ve configured it in a way where the next owner could turn the utility room into a bathroom and then have two additional bedrooms / playrooms, etc.

The 3rd floor of our unit (9′ ceilings) will have the master bedroom in the rear and a spare room in the front. The spare room will most likely be a den / exercise room – have a treadmill, a couch and a TV. Like the clean studio above it, the den will have clerestory windows letting in light from the stairwell. We wanted the bedrooms in the back since the back of the building should be quieter.

The 2nd floor of our unit (one floor up from parlor, 10′ ceilings) will have the spare bedroom in the back and a home office in the front. Having the office in the front achieves two goals… First, the office isn’t noise sensitive, so it’s on the noisy side of the building. And second, it’s used during the day, so air conditioning bills will be lower since there’s far less heat gain on the North side of the building. (We’re using a mini split ductless system where each room is a separate zone). On this floor, attached to the bathroom is the laundry room. Having been in apartments for the past 20 years, we can’t wait to have a washer/dryer in our unit! Oddly it’s one of the things we are most looking forward to.

The parlor floor (10.5′ ceilings) will have the living room, dining room and kitchen. This is where we had to get a special reconsideration to have an open floor plan since code would otherwise require having 1 hour fire rated walls around the staircase and from the staircase to the front door. I know some people hate having front doors open into kitchens, but we saw so many narrow unusable living rooms that we decided to put the living room in the rear where it could be more spacious. But it does mean that the kitchen design needs to be pretty flawless since it will be people’s first impression of the house. One thing we have noticed is that the living/dining/kitchen space is nearly identical to our old apartment. This is a 15′ wide townhouse – we may have 6 bedrooms, but some things are more on the modest side.

There will be a narrow 4′ wide deck with a pergola off the living room. We kept it narrow so the tenant’s window would still get plenty of sunlight, and we added the pergola (which we’ll have vines growing on) to give us some shade in the summer. Here’s a diagram showing how it will look… 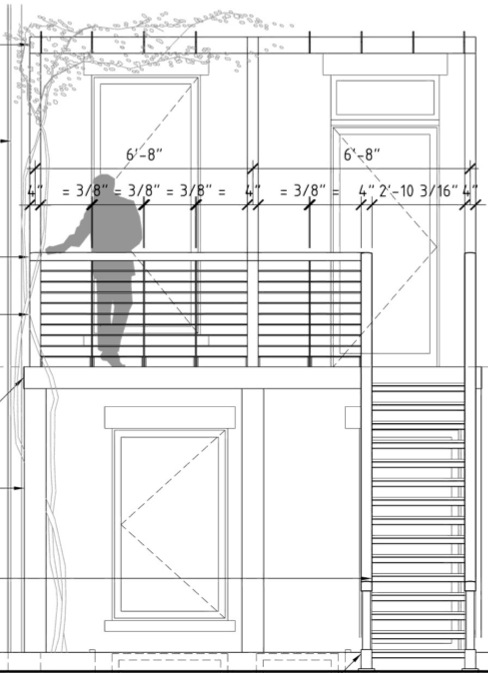 From the beginning of our process we knew that we didn’t have the biggest townhouse and as a result our design choices were a bit limited. There just wasn’t the space (or budget) to be all that extravagant. Where we were a bit extravagant was with the staircase. It will have a 3′ x 6.5′ lightwell running down the middle of it that will help get light deeper into the core of the building. We’re also going with open risers to help let light bounce around. From the beginning I knew the stairs would be the dominant design element in the building. To that end our architect really stepped up and has given us an incredible staircase design. You can see a bit of it in this diagram…

Basically there will be swoopy translucent plastic (or fiberglass) panels that will be attached to simple metal framing. Because it’s reducing metal work it should be a fairly economical solution. It’s also changeable. I had thought the staircase would permanently define the space, but because the panels can be redesigned and executed in different materials, there’s nothing permanent about it. Not shown in the diagram is the architect’s solution for the “railing” along the hallway. We’ll be taking the existing floor joists cutting them down into thin strips and creating a “screen” (wall) with vertical strips of old floor joists. That will be our version of “original details” and should look pretty incredible if we get the right balance of colors and textures in the space.

Continuing down the building… The rental unit will have smaller rooms that are still a decen size (i.e. the bedroom will be 175 sq. ft. and the living/dining room 260 sq. ft.). We’ll be putting in a decent Ikea kitchen (not bare bones, but still Ikea). One of the things we’re debating currently is the appropriate level of security for the rental unit. Our options are metal gates/bars on the doors/windows -or- laminated security glass with a security break sensors in lieu of gates/bars. Gates and bars will feel more secure, but it may seem like you’re in a prison.

The rental will be a bit of a duplex. I say “bit of” because it incorporates cellar space which can’t legally be a bedroom. It can be a media room, a workspace for an artist or craftsman, or a home office. Because that’s the south-facing wall, there should be plenty of light down there so it won’t feel too much like being in a cellar. What this means is is that it’ll be far more than a 1 bedroom, but not really a two bedroom. The tenant will also have their own laundry room in the cellar.

The cellar will also have the mechanical room and storage space for us. There’s this incredible arched brick ceiling in the “vault” under the “front yard” which we’ll be repairing/restoring. This townhouse is rather unusual in that it has a separate entrance for the cellar under the stoop, so we don’t have to go through the tenant’s space to get to the cellar.

In terms of utilities we’ll only be providing heat for the tenant. We’re separating all the other utilities – gas, electric, even water. Given how the boiler will work if we were to put in separate heating for the tenant the heating system wouldn’t run at optimal efficiency. So it won’t cost that much more to give the tenant heat. We don’t want to have the typical over heated New York apartment. Instead, we’ll keep it at a temperature where we’re comfortable in a light sweater but not so cool that our hands get cold. That will be lower than the minimum heat required by NYC, so the A/C units in the rental unit will be “mini PTAC” thru-wall units which can also provide supplemental heat as needed to keep the tenant comfortable. That means we’ll need to have the tenant sign something saying they understand they aren’t getting full heat for their unit.

I know Julia Angwin had mentioned on her blog at the Wall Street Journal that she had a tough time trying to figure out if she still wanted telephone jacks. Our strategy for voice and data is fairly aggressive, but also a bit conservative. Half of the closet in our home office will be a mini “server room” complete with rack mounted servers, cool air intake and warm air exhaust. (Dan and I do web projects for a living – we need all that sorta stuff). All voice, data and security will “home run” to that closet. We’re assuming we’ll continue to have a Vonage VoIP system, so we see won’t have a dedicated phone line coming into the building. Other than in the server closet there will be only two voice jacks – one in the office for the fax machine and one in the living room for a phone. We’ll also have Ethernet jacks throughout the house even though wireless will be our main form of connectivity. Primarily we’re putting Ethernet jacks next to cable TV jacks because we believe video and entertainment over the Internet will be common in the near future and the video/entertainment boxes may not support wireless. The Ethernet jacks will also be used for wireless routers – we assume we’ll need several to properly cover the entire house.

There’s a lot more detail I could go into, but that covers the basics… It’ll be fun to see it all come together…