Our place is shrouded with black netting that covers the scaffolding they’re using to work on the front façade. As a result it’s hard to see their progress, but they’re finally down to the parlor level on one side, so you can see their restoration work as you go in the building… 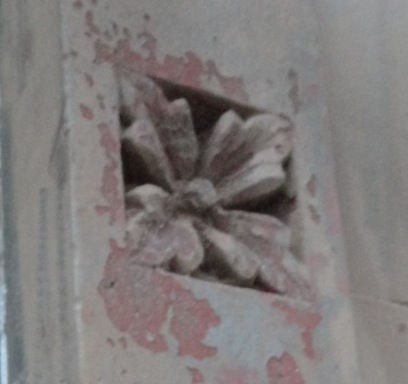 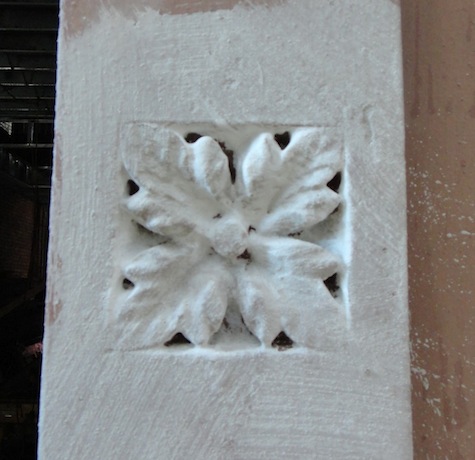 There’s also a detail over the front of the big parlor window that was missing on our place and is missing on many of our sister townhouses, but is still there on one of them – it’s a subtle crown moulding-like detail in a corner just above the window. The foreman noticed the detail on the neighboring house and is having the mason reinstate it on our place. They seem to be having fun with the restoration… Which is good… 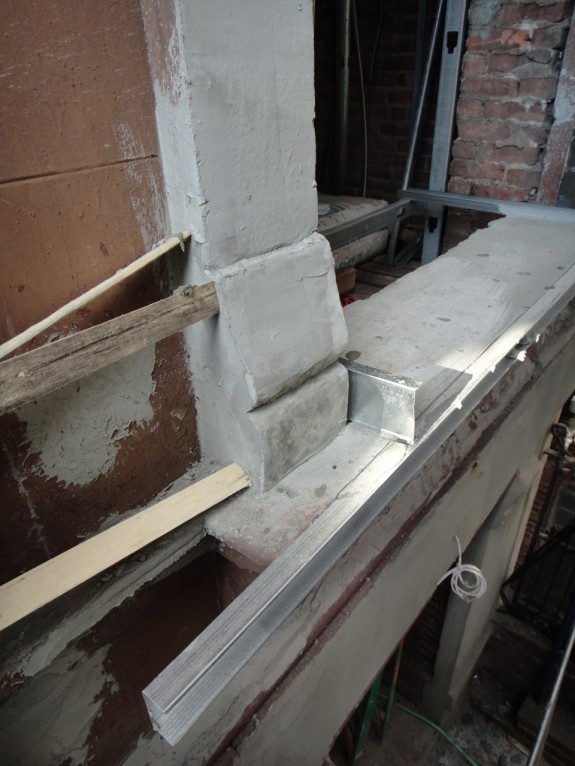 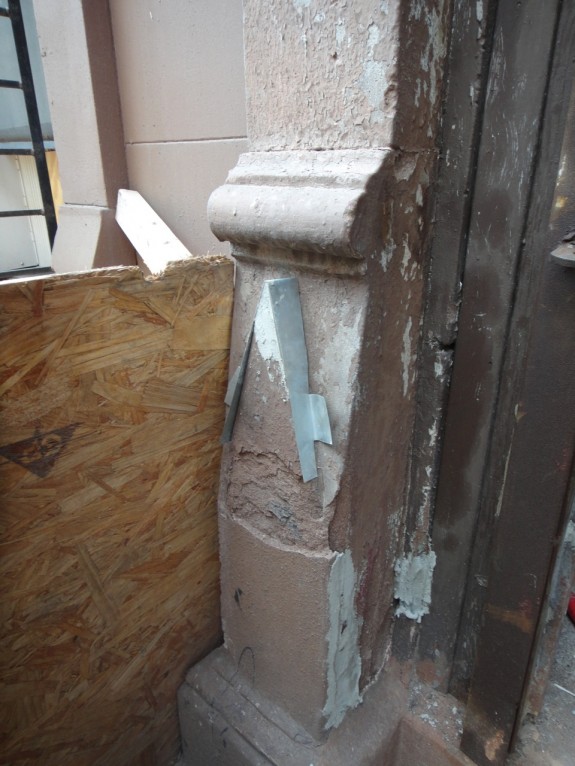 With all the netting up it’s been hard to see the progress. It will be cool when they take down the netting – we’ll finally get to see a fresh “new” façade.

Dan’s also been fussing over getting the color of the façade just right. He got a piece of the original brownstone and had it color matched. But that’s tricky ’cause the original brownstone had something like mica in it that made it sparkle slightly. We’re wondering whether we can get a mica aggregate in the paint we use, but we don’t want to overdo it and make it look like its got bling embedded in it…

One of the things we’ve been contemplating lately is the color of our cornice. We thought we had a color picked out, but as I was half way done writing up this blog post I changed my mind. When I talked with Dan he agreed with me – that we should change our strategy.

It all started with me walking around Mount Morris Park taking pictures of townhouses for real estate clients – with the objective of understanding what was out there and possibly available. I looked at the cornice colors and my favorite color was gray – it just makes for an incredibly handsome cornice. Here’s the gray cornice from 30 West 120 which sold recently for $2.5M… 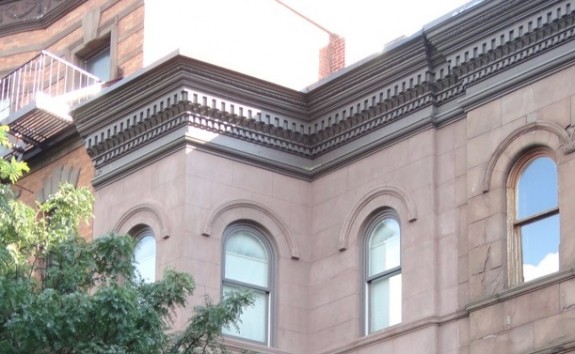 To my eye that’s a bit of a brownish gray. There are also some handsome gray cornices at the other end of our block – 102 and 104 West 123rd both have gray cornices…

What we’re worried about when it comes to using gray is that our façade will have too many different colors. Our windows will be a chocolate color, our stoop railings and the grill work on basement level will be black – gray wasn’t really a color we were going to have anywhere else except the cornice, so it didn’t really make sense. The places we liked that used gray used it elsewhere on the building.

The chocolate is sort of tone-on-tone with the brownstone façade. We could have gone with a chocolate cornice… Those look good too…

But the color we’ve decided to go with is black…

That means our building’s hat (cornice) will match it’s shoes (stoop railings and basement grill work) while the windows and basement doors will just blend in with the brownstone. The only down side is that it will be a pretty somber/formal color combination.

The one remaining question is the color of the front parlor doors. Dan’s advocating for chocolate colored doors with the logic that all the wood on the façade should be the same color. I could see that, but I could also see black since that the façade’s accent color is black and the parlor door is a focal point of the façade. We’ve got some time before we have to make that decision. I’m guessing we’ll go with chocolate – it will soften the look and make the façade seem less formal. 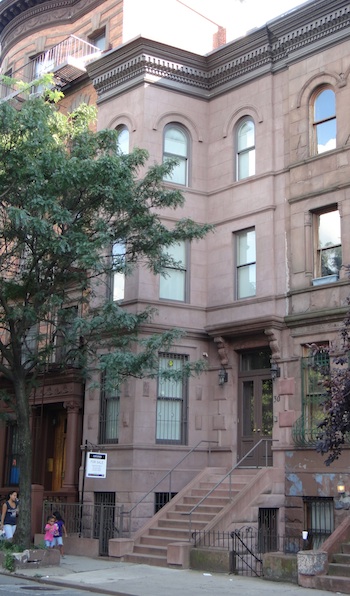 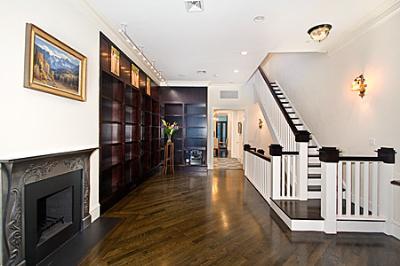 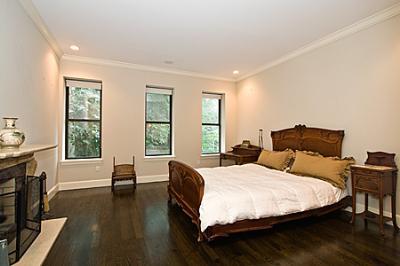 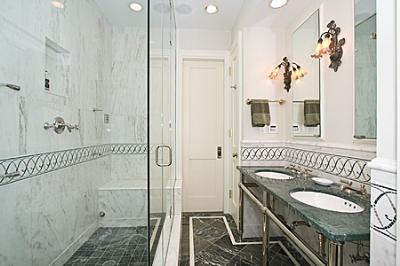 Back in the late 1800s when most of Harlem was built brownstone was all the rage. It was a local stone (quarried in Connecticut) and less expensive than limestone. BUT brownstone is a far softer and more porous stone than limestone. The limestone façades aged much better than the brownstone ones did. 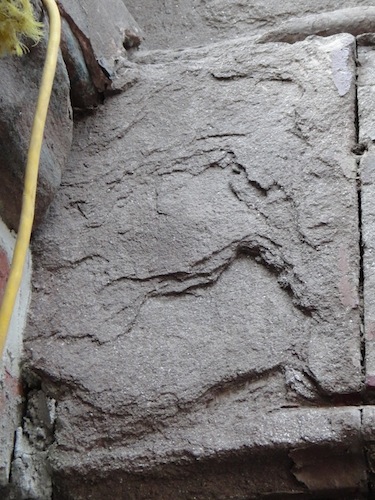 One problem was that brownstone has a distinct grain where limestone doesn’t. People in the 1880s and 1890s didn’t really like to see the grain so the stone was cut in line with the grain. That meant that as water got into the stone and froze the stone would sheer along the lines of the grain and flake off. You can see this happening on our house in the picture to the right.

To compensate people have been painting brownstone, and putting stucco finishes over it that simulate brownstone. You don’t actually see many true brownstone finishes in Harlem any more. That’s always made me wonder what brownstone was supposed to look like…

This past weekend we went to Pasvalco over in New Jersey and I mentioned to the woman who was helping us that we were renovating a brownstone but I wasn’t sure what brownstone was supposed to look like. She showed us pictures of a project they did on the Upper West Side for Mark Gorton – founder of Limewire (software that facilitates illegal fire sharing). Back in 2005 he bought 108 West 76th Street for $4.8M (all cash) and then proceeded to do a major renovation on the place. He (almost) completely replaced the brownstone façade on his 5 story, 9,250 sq. ft. single family townhouse. Pasvalco did the job using brownstone quarried from Connecticut. So if you take a look at 108 W 76 that is how brownstone is supposed to look… 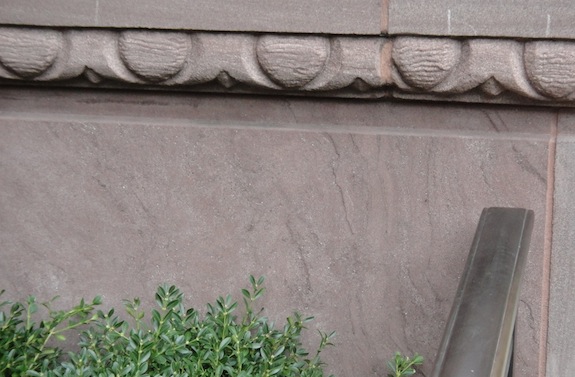 That’s with brownstone cut “correctly” – with the grain showing so it won’t flake. As I mentioned, back in the 1800s they cut it differently so the grain wouldn’t show so much, but that caused flaking. I personally think the grain is rather beautiful…

Given that brownstone used to be less expensive than limestone but now it’s far more expensive, I asked one of the guys why that was. The answer was pretty simple – there used to be 30 or 40 brownstone quarries in Connecticut, now there is just one quarry and it’s only a 3 man operation. Simply put the owners of the other quarries made more money turning their land into condo developments (land in Connecticut is expensive). In contrast there are still lots of large limestone quarries in places like Indiana and shipping costs are (relatively) lower than they were in the late 1800s. 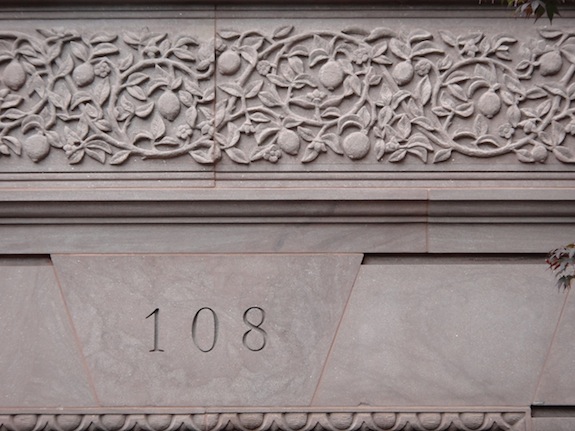 One other factor that makes brownstone expensive is that the stone yards have to assume 100% waste when working with brownstone. So they have to quarry twice the amount they need. With limestone there’s much less waste, so less material is needed to complete the job.

While raw, properly cut brownstone is gorgeous, it’s simply cost prohibitive for Harlem brownstones. In our case our façade is currently painted and in generally decent condition. For the most part only the lintels and sills are deteriorating – most of everything else is in pretty good shape. The National Park Service allows you to repaint in a situation like ours, so that’s what we’ll be doing. We’ll repair what damage we find and then repaint. The next most expensive solution would be to chip and resurface with a brownstone-like stucco – but we need to control costs…

The “store front” came off our building yesterday and we were pleased/amused to see the painted sign for The Happy Game Room that was visible in the 1980 tax photo. Our place has a commercial overlay, so it’s legal to run businesses out of the bottom two floors. Around 1980 the business that was in there was The Happy Game Room. At that time the neighborhood was going downhill quickly, but our building had an owner who seemed to care about the building. I’m not sure what all went on in The Happy Game Room, but it’s sorta fun that the sign is still there… 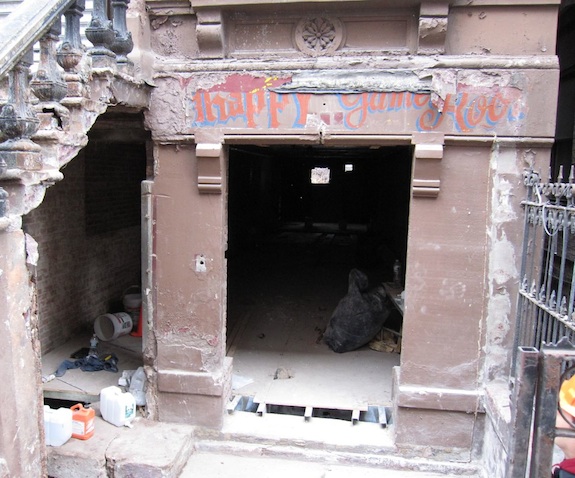 And no, we’re not restoring/keeping the sign. We don’t want to have people knocking on our tenants’ door wanting to play cards – lol.

More than anything else, I’m just happy the store front is gone and it’s starting to look like a normal brownstone again. We’re going to have french doors in the opening you see in the picture above, not a window like most brownstones. There are two entrances under the stoop, and the 2 foot wide entrance under the stoop into the rental apartment isn’t up to code (which requires 3 feet of width). BUT the good part is we can get to the cellar without having to go through the rental apartment. 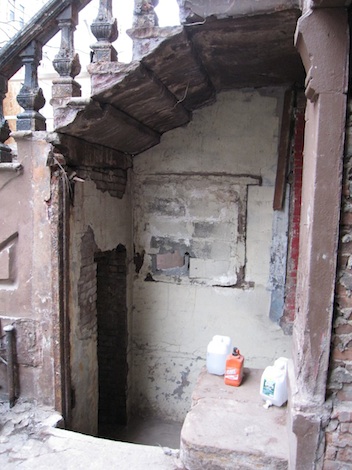 The blocked up opening you see above right will be reopened and a proper grille put in – more or less as it was originally.