Since the windows have gone in Dan has been noticing that the window make the rooms feel a little dark – that they block a fair amount of light. He’s commented that it feels a bit like wearing sunglasses.

We actually have three different types of glazing on the building. All three are on the back of the building… 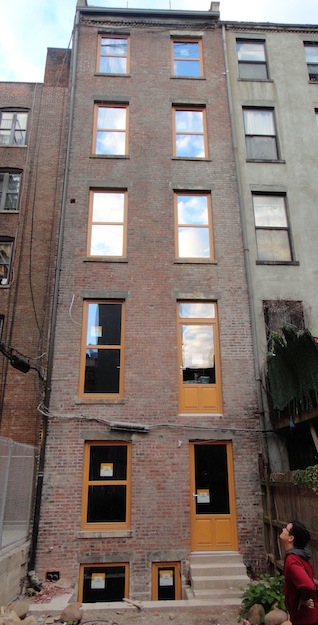 Starting from the bottom, the rental unit has what Gaulhofer calls G28 glazing – which is their standard glazing. 80% of visible light is transmitted through the glass, but only 23% of UV gets through, and 62% of “solar heat”. (The more “solar heat” you block the lower your A/C bills in the summer, but the less help you get with heating in the winter). We use that glazing on most of the front of the building as well.

Going up one floor to the parlor floor security was important and there we have “smash proof” glass which Gaulhofer calls “G50”. That lets through 78% of of visible light, but only 4% of UV, and 58% of “solar heat”. Blocking the UV is important since it means artwork won’t fade, but we’re not sure how it will affect our plants. We use that same glass on the roof and on our kitchen window in front (the other locations where security might be an issue).

The top three floors we use a fairly aggressive glazing (Gaulhofer’s G23) since, unlike the lower windows, there will be no shade and it’s a south exposure (the deck shades the tenant, and the pergola will shade the parlor floor). G23 only lets through 61% of visible light which explains why Dan feels like he has sun glasses on in those rooms. Like the G50 glazing it only transmits 4% of UV, and solar heat gain is a lower at 42%.

Thing is, the sunglasses effect would actually be worse with American-made windows. For example if you look at Marvin Windows (considered the best big American window company), a PDF on their site shows their windows typically only transmit 40 to 50% of visible light. A few get up to 57% but those are somewhat inefficient windows that don’t qualify for tax credits. Our most aggressive glazing transmits more visible light than Marvin’s least aggressive glazing, and some of our windows transmit twice the light of some Marvin window.

Because Marvin blocks so much light, they also block more “solar heat” – typically only 18 to 33% of solar heat gets through a Marvin window. That difference between the manufacturers reflects the difference in their markets. Most of the US is hot and bright in comparison to Austria and northern Europe where most Gaulhofers are installed. Gaulhofers excel at insulation (the “U Factor”) which is the critical component in a cold climate. So our energy bills would be lower if we had gone with Marvin, but that just is what it is – we like the trade off we made and prefer more visible light transmission.

The sunglasses effect is only really an issue for us because we’re now accustomed to the house with no windows. If we had only known the house with windows installed we probably wouldn’t have noticed it. But the glazing you choose for your windows does make a difference both in your energy bills and your experience living in the house (how much light you have in your rooms) – so choose carefully.

One thing I should add… You may think “we live in a fairly cold climate, wouldn’t solar heat gain be a good thing since it reduces winter heating bills?” I thought the same thing, but the bottom line is electricity for A/C is far more expensive than gas (or oil) for heat, so you should favor lower SHGC values.